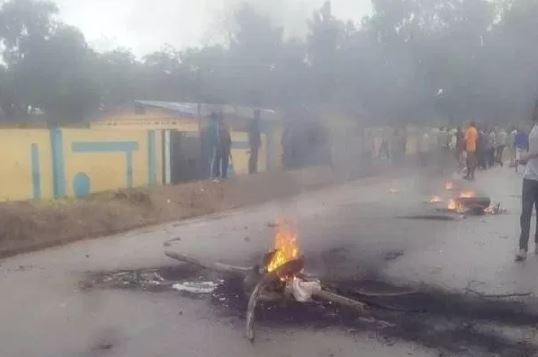 Ajali police station in Orumba North LGA of Anambra state has been razed by men suspended to be members of the proscribed Indigenous people of Biafra (IPOB) chanting no elections in Igboland.

Eyewitness account disclosed that the incident happened at about 2am Thursday morning, while inmates in the police cells were also reported to have been freed by the hoodlums.

When contracted via telephone, the Anambra State police Public Relations Officer, Haruna Muhammed denied the claim, said it remained a case of fire incident until the command concludes its discreet investigation to ascertain the true cause of the unfortunate incident. He added that no life was lost and no casualty.

Personnel of the division successfully protected critical Police assets including firearms from the inferno.

The police spokesman also said the Commissioner of Police CP Mustapha Dandaura was at scene of the incident for an on the spot assessment.