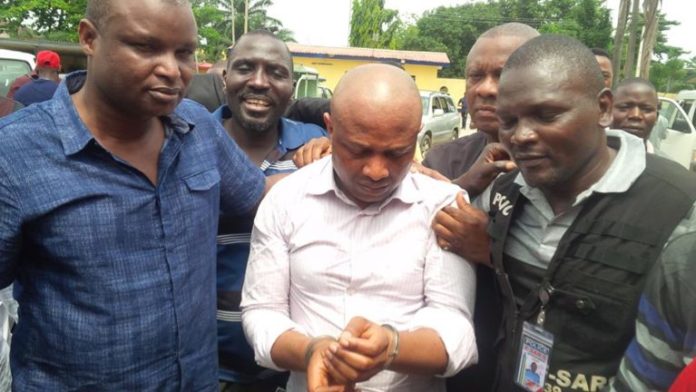 A Federal High Court in Lagos on Monday struck out a fundamental rights enforcement suit filed by alleged kidnap kingpin, Chukwudumeme Onwamadike (a.k.a Evans), against the police over seizure of his property.

Justice Mojisola Olatoregun held that the court lacked the jurisdiction to entertain the case.

She said that the suit ought to have been filed before a Lagos State High Court where the applicant was facing charges of kidnapping.

The News Agency of Nigeria (NAN) reports that Evans, through his counsel, Mr Olukoya Ogungbeje, filed the suit in June 2018 and joined as respondents, the Inspector-General of Police (I-G), the Nigeria Police and I-G’s Intelligence Response Team.

The applicant prayed the court to declare that alleged forceful seizure of his property by the respondents without any court order was illegal and unconstitutional.

He listed some of the property as N500 million, another N500 million, two residential houses located at Magodo, Lagos State, a Brigade wristwatch worth 20,000 dollars, necklaces worth 25,000 dollars and five pieces of diamond rings.

The applicant had sought an order compelling the respondents to unconditionally release the property.

Evans had also asked the court for an order compelling the respondents to unconditionally unseal and vacate without delay, the two residential houses located at Magodo.

The judge noted that the respondents did not file any defence in spite of being served hearing notices.

She, however, held that when confronted with a claim under the fundamental rights enforcement procedure, it would be important for the court to critically look at the reliefs sought.

According to her, the main issue to be decided is whether the plaintiff’s claim constitutes a violation of his rights under the Fundamental Human Rights (Enforcement Procedure), adding that the right to own a property cannot be denied except for due process of the law.

She held that the applicant failed to show that the property were forcefully seized within the circumstances of his arrest.

“The only conclusion I can draw is that the property were taken consequent upon his trial for kidnapping before the Lagos State High Court.

According to the judge, although federal and state high courts have concurrent jurisdiction, the instant case ought to have been taken to the court where the defendant is facing trial for kidnapping.

“This court must be careful not to interfere with due process of the ongoing trial of the applicant before the Lagos State High Court.

“This court lacks the jurisdiction to entertain this case; same is hereby struck out,’’  she held.

NAN reports that other prayers sought by Evans include an order compelling the respondents to apologise to him and pay him N1 billion as damages for the alleged forceful seizure of his property.

He also sought an order of perpetual injunction restraining the respondents from taking any action against him or any of his property in relation to this case.

“EXPECT A NEW DAWN IN OUR PRIMARY SCHOOLS EDUCATION SYSTEM” –...