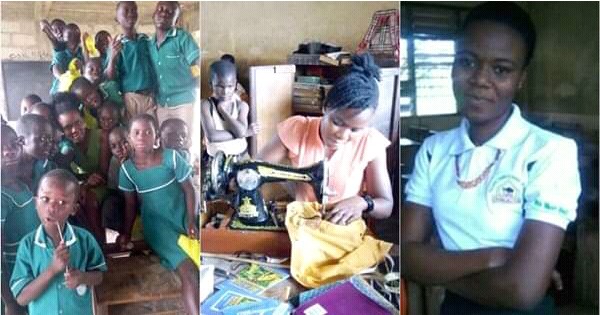 A good-hearted teacher at Kubease in Ejisu, has been impacting the lives of young people in an extraordinary way despite having access to very limited resources.

Naomi Awomeh, a teacher at Kubease in Ejisu, a small village in the Ashanti region, Ghana, has become the love of many hearts after the story of how she’s touching the lives of young pupils in the school she teaches gained attention.

The community fashion designer spends her school lunch break stitching and patching up worn out uniforms of her students.

Naomi’s story first gained traction on social media when Emmanuel Kobea, a young man who was touched by Naomi’s laudable initiative in the school, shared a photo of her with a caption which reads:

”Change Starts ; Wherever You Are!

One of my daughters in the Lord Awomeh Naomi teaches at Kubease near Ejisu. She learnt dressmaking during her vacations while in College. She in turn, teaches her Pupils needle work and she patches their worn out Uniforms during breaks✂️#ChangeMakers.”

Beyond being selfless, Naomi’s extraordinary humane work is helping the deprived pupils.

Naomi learned dressmaking during vacations while at the Teacher Training College.

She’s currently using her skills with her personal sewing machine to carry out this selfless act, not only stitching tattered school uniforms but also transferring skills to pupils and teaching them how to be leaders.

With very little resources, Naomi Awomeh, epitomizes what makes us human; loving our neighbors as ourselves.

Hopefully, tens and thousands more people would take on the role of shining light in their little corners.