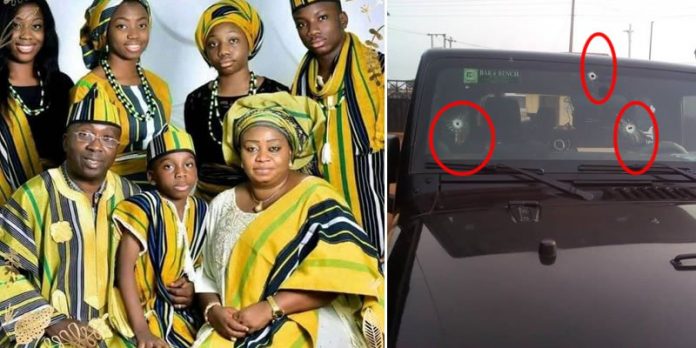 An Abuja-based Senior Advocate of Nigeria, Chief Ogwu James Onoja SAN, has stated that the creation of state police has become necessary in the face of the security challenges experienced across the country.

Speaking with newsmen after a Thanksgiving event in Abuja over the escape of his wife from an attack while on her way to Dekina in Kogi State recently, he said some governors have genuine intention to secure their states but that the Nigeria Police lacks equipment to currently secure the country.

He stressed that governors would not manipulate the State Police if the judiciary was strengthened enough to handle abuse of powers by governors.

Describing his wife’s escape from the gunmen attack as a miracle, he said the bullet-riddled SUV was condemned.

“I am doing Thanksgiving because I nearly lost my wife. My wife was brutally attacked.

“On 25th April, 2019, she was ambushed by three set of gunmen on her way to Dekina in Kogi State who shot more than 30 bullets inside the car. I thank God, I didn’t lose her, I didn’t lose Police orderly with her and the driver.

“I am celebrating because if you see the car, you know that it was a miracle that nobody died. You will not believe how people survived.”

While condemning the insecurity in Kogi State, he revealed that all complaints he made to Kogi State Commissioner of Police and the Inspector General of Police fell on deaf ears.

“Over a month that this thing happened, my wife’s statement has not been taken.

“God is the only one securing this country because if it can happen to me, at this level, then the common people in the society have no hope.

“They don’t have helicopter to monitor crimes. People should be ready to protect themselves and be each other’s brother’s keeper,” Onoja revealed.

He observed that wealthy citizens have taken over the use of trains which was originally meant for ordinary people, saying that the development would leave road users unprotected.

The senior advocate urged the Federal Government not to retrieve guns from law-abiding citizens, arguing that doing so would further make them vulnerable to attacks.

“Moreso, the issue of recovering gun from law-abiding citizens would be unfortunate because it would leave those not committing crimes unprotected,” he said.

OPINION] The Dreadful Display And Show Of Shame At Ogun APC...