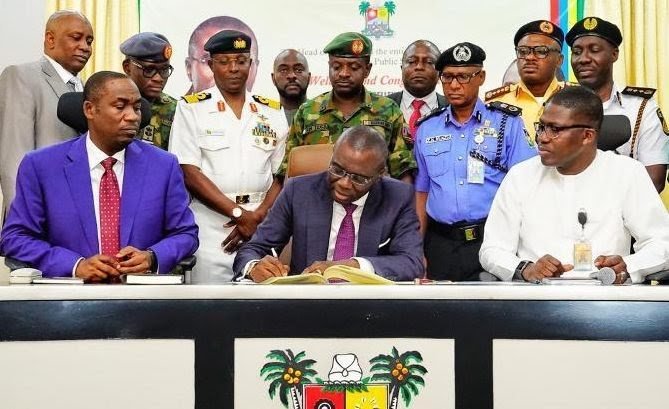 Gov. Babjide Sanwo-Olu of Lagos State on Thursday swore in Mrs Folasade Jaji, as Secretary to the State Government as well as Mr Tayo Ayinde as Chief of Staff.

Sanwo-Olu also swore in Gboyega Soyannwo as Deputy Chief of Staff and charged the appointees to hit the ground running to justify the trust reposed in them.

He reminded them that their appointments were a call to service and an acknowledgement of their exemplary track records in their various fields of specialisation.

This appointment is necessary and also critical for a smooth take-off of this administration which is barely one week old.

“You have been brought on board to assist the administration for effective actualisation of the visions and agenda of the APC, our state and the people,” he said.

Sanwo-Olu advised them to be innovative and receptive to new ideas that would continue to make the state a centre of excellence.

Sanwo-Olu charged them not to be complacent in performing their duties but continue to strive for excellence.

He urged them to ensure the delivery of services in tune with the demands of the 21st-century economy and provide leadership to other levels of staff.

The governor said that the portfolios of the appointees would be announced soon.

Responding on behalf of the appointees, Jaji, who thanked the governor for giving them the privilege to serve, promised to justify the confidence reposed in them.