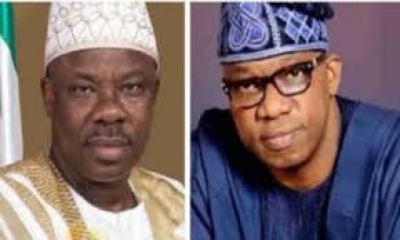 Ogun State House of Assembly on Friday reversed all last minute appointments, employments and financial engagements of the immediate past Governor, Senator Ibikunle Amosun. Amosun appointed 21 Permanent Secretaries and more 75 traditional rulers on the eve of his government.

The development followed the passage of a bill titled H. B 047/OG/2019- “Nullification of Irregularities (Amendment) Law, 2019” on Friday at the plenary. The Assembly had suspended its standing orders 45 -48 to allow for the consecutive second and third readings of the bill.

The Speaker, Surah Adekunbi has directed the Clerk of the House to prepare a neat copy of the bill for the governor’s assent. The legislature equally suspended all the Chairmen in 20 Local Government Areas and 37A Local Council Development Areas in the state.

This, according to the assembly, was to allow for investigation on allegations leveled against them on gross misconduct and misappropriation of public fund. Consequently, the assembly directed all LGAs and LCDAs political office holders to hand over to the Head of Local Government Administration in their respective councils and LCDAs, just as it ordered them to appear before the Assembly on 7th of June, 2019 over alleged misappropriation of funds.

It was gathered that the lawmakers held an emergency session few hours after they had met with Governor Dapo Abiodun at the Governor’s Office, Oke – Mosan, Abeokuta, on Friday.

MAGU EXPRESSES CONFIDENCE IN NDA FOR TRAINING OF CADETS