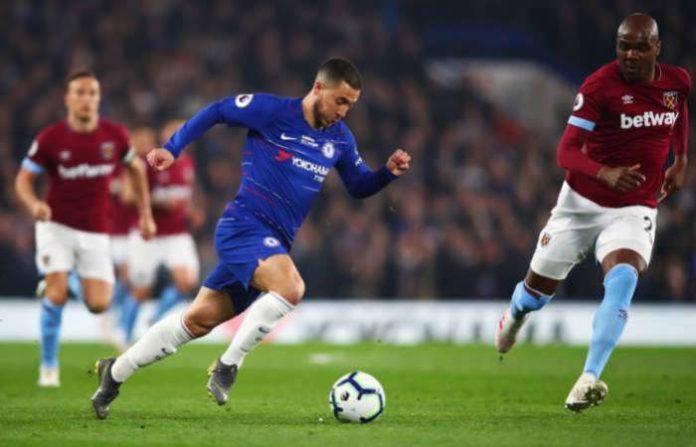 Former Liverpool defender Jamie Carragher has said Eden Hazard has to leave Chelsea for Real Madrid because he is one of the best players in the Premier League.

Hazard scored twice including a brilliant opener, as the Blues moved back into the Premier League top four with a vital three points against West Ham on Monday.

But it comes in a week when the Belgian has been the subject of the most intense speculation yet, that he will leave Stamford Bridge for the Bernabeu in the summer.

Chelsea fans were taunted by their Hammers counterparts regarding their star man being destined for a summer exit and Carragher risked angering them further by branding him “too good for Chelsea”.

“To be honest I don’t think you can ever stop that (speculation around Real Madrid).

“Most players see that as the pinnacle, it’s happened at both our clubs, United and Liverpool, and I agree it’s sad in terms of not watching them week in, week out.

“But I almost feel like Hazard has to play for a Real Madrid or a Barcelona.

“He’s that good that there are some players you think just have to play at that level.

“No disrespect, but I think Hazard’s too good for Chelsea right now.

“I just think he’s that good a player.

“At this moment, Chelsea aren’t. He’s won leagues with them, he hasn’t won a Champions League, but I think as an individual player he needs a Real Madrid on his CV to finish that career,” Carragher said on Sky Sports Monday Night Football after the game.