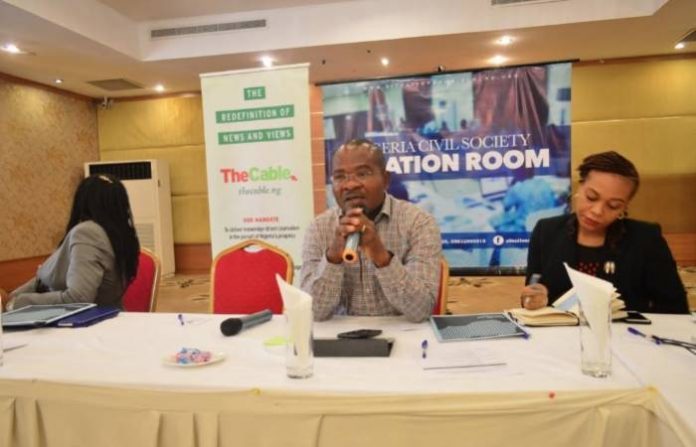 The Nigeria Civil Society Situation Room on Sunday expressed worry over the spate of violence during the March 9 elections and called for compensation for the victims .

Mr Clement Nwankwo, Convener of the coalition of 70 civil society groups made the call at a news conference on the group’s third interim report of the Governorship, State Houses of Assembly and Area Council elections in Abuja.

According to Nwankwo, elections are for citizens to democratically exercise their right to choose their government and as such, no election should cause lives.

“Situation Room notes with profound sadness the election related violence that has led to the deaths of 58 Nigerians in this electoral cycle.

“This includes Hon. Temitope Olatoye (aka Sugar) of Oyo State and Sunday Oroh in Enugu State who were shot yesterday.

“There must be individual accountability for violence and manipulating of the election process; we cannot afford to permit this level of impunity and disruption of the elections.

“The number of fatalities around these elections is unacceptable voters and Independent National Electoral Commission (INEC) staff lost their lives, we call for reasonable packaged compensation to families of victims.’’

He said that in the light of the serious shortcomings with the elections, Situation Room called for an independent Inquiry into the conduct of the 2019 Nigeria General Elections.

He said that the independent inquiry should address amongst other issues; procurement, logistics management, role of the military and abuse of process by INEC officials.

He said that was urgently needed to identify challenges and recommendations towards repairing the damaged credibility of Nigeria’s electoral process.

Nwankwo said that INEC should lead on this and transparently inform Nigerians where it encountered challenges while urging it to take the lead in pushing for reforms in the electoral process.

He said that of immediate importance was the need for INEC to call out public institutions, individuals and events that might have undermined its ability to carry out its mandate.

“It is also important that INEC is honest in admitting its own failures; this is needed urgency in restoring faith in the election process’’, he said.

He also condemned the activities of the military during the elections and the irregularities in the result collation process.