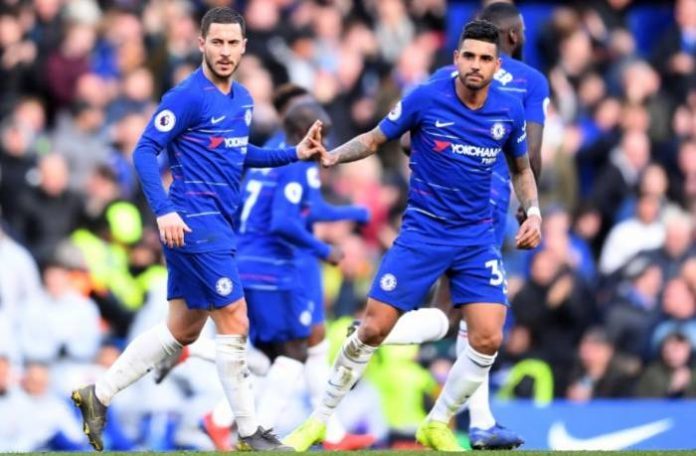 Raul Jimenez put Wolves into the lead just before the hour mark, but Hazard broke the visitors’ hearts with a strike from distance which found the bottom corner.

However, Chelsea remain in sixth position in the standings after more dropped points at their home ground, while Wolves open a one-point advantage over Watford in seventh place.

Chelsea went into the game having improved in the final third over their last three fixtures, but Maurizio Sarri’s men were frustrated during the opening 45 minutes by a disciplined defensive performance from the visitors.

The Blues had over three quarters of possession but despite their time on the ball, just one opportunity was created for Gonzalo Higuain after 20 minutes.

The Argentine latched onto a pass from N’Golo Kante, but the forward could only fire straight at Rui Patricio from an acute angle.

Wolves were offering very little going forward, but Diogo Jota did have a goal disallowed having handled the ball before firing a shot into the top corner from distance.

The same pattern of play continued after the restart as Wolves continued to frustrate their hosts, but the West Midlands proceeded to deliver the sucker punch they were looking for by taking the lead after 56 minutes.

Jota collected the ball on the halfway line and the Portuguese and Jimenez proceeded to play the ball between themselves, and it led to the latter being played through on goal.

Jimenez looked like he had taken too much time when entering the penalty area, but the Mexican’s eventual shot deflected off Cesar Azpilicueta and rolled into the bottom corner.

Going behind sparked Chelsea into life, and Patricio had to be alert to keep out a low 20-yard strike from Higuain and a driven long-range effort from Pedro.

Chelsea remained on the offensive without creating any more opportunities, and even the introduction of Callum Hudson-Odoi and Willian failed to lead to a sustained spell of pressure being put on the Wolves backline.

The visitors were offering more of a threat on the break, but Chelsea went close with three minutes as William saw a curling effort tipped wide of the far post by Patricio.

The fourth official indicated four minutes of added-on time, and Chelsea equalised soon afterwards to break Wolves’ resilience as Hazard sent a 25-yard strike through a pack of players and into the far corner.