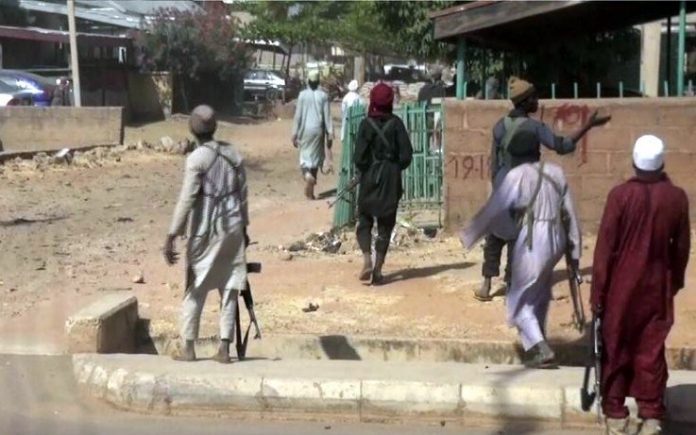 Daily Trust reports that the insurgents stormed the Marte military base, 153 Task Force Battalion, shooting sporadically and in the process razed “everything”.

It quoted a military source as saying on Monday: “The insurgents seem not to have intended harming any civilian, but only to capture the town; so they stormed the military base, taking troops there unawares at about 6pm (Sunday) much less than an hour to break fast time”.

“We engaged them in a fierce encounter for about an hour. Initially, we were about getting victorious over them, but they overpowered us, and all troops in the burning base were set asunder, with all of us fleeing in all directions in the bush.

“I can tell you that we were about defeating them; but God knows the tactics they later deployed and the defeat turned against us; we all fled; they are in control of the town now.”

According to another fleeing source, “casualty figures cannot be confirmed on both sides, with all of us fleeing in all directions into the bush, and many of us finding their way to Maiduguri, and majority still roaming in the bush.

“Many of us who are lucky to find our way to Maiduguri or any safe community will elope to their home states across the country to relieve themselves of the trauma.”

This development is coming days after Lt Gen Tukur Buratai, the Chief of Army Staff, declared that Boko Haram has been defeated.

According to him, Nigerian military is now fighting an international criminal gang known as Islamic State of West Africa Province (ISWAP).