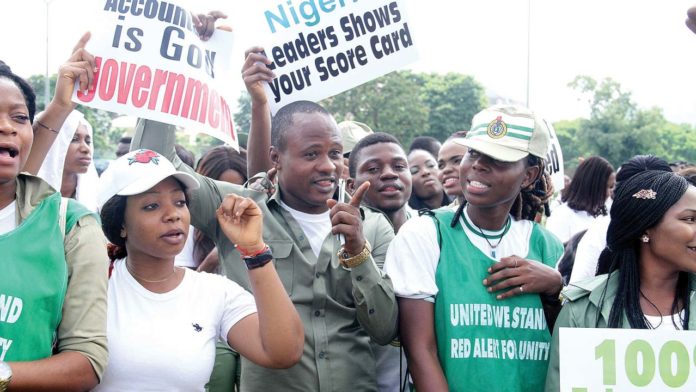 According to the United Nations, the life expectations of an average Nigerian was put at 43 years some years ago.

I wonder if youths would ever have the opportunity to rule this country again.

According to the Constitution, the age of would – be State House of Assembly and House of Representatives members is not less than 30 years, that of Senate and Governor is put at 35 years while a potential President must not be less than 40 years.

Unfortunately, majority of Nigerian Youths today are not as Lucky as…

They all led the struggle for Nigeria’s independence.

According to Wole Soyinka (NOBLE Laureate), the 1st military Coup was led by Major Kaduna Nzeogwu at age 27 years and the Coup was countered by his fellow counterparts such as…

The counter –  Coup brought into power Yakubu Gowon at age 31 who ruled until he was forced out at age 40.

How will it be possible for 25 years Nigerians Youth who is still in the University due to incessant strikes to be a councellor? Will it be possible for an unemployed graduate of 30 years to be a member of House of Representatives?  Is it possible for an average Nigerian Youth who collects peanut as salary to contest for governorship at age 40 years?  Judging by the political culture, political education and economic suppression, the answer to the above asked questions is negative.

Could it be a coincidence or deliberate attempts by our leaders to incapacitate the youths by making them write WASSCE and UTME several years before they make it and to search endlessly for job so as to make them leaders of Youth wing of political parties, unable to feed themselves, and personal assistants to the political leaders?

As stated in The Trouble with Nigeria as written by Professor Chinua Achebe. He stated that the problem with Nigeria is simply and squarely a failure of leadership. There is nothing basically wrong in the Nigerian character.

There is nothing wrong with the Nigerian land or Climate or water or Air or anything else. The Nigerian problem according to Achebe is the unwillingness or inability of its leaders to rise to the responsibilities, to the challenge of personal example which are the hallmarks of true leadership.

From Local Government Council where men of 40 to 50 years scramble to be councilors all the way to the presidency, the only business of government is nothing but looting.

Nigerian youths must have a voice and should be given the opportunity to contribute to the governing process. It is high time the youths broke the yoke of compliancy and dare leadership positions without the help of political godfathers.

However, some youths have been infected with the virus. The desperation to succeed / get rich quickly has made a large number of youths act perpetually unperturbed with what the leadership is doing to them at the moment and at the same time depriving the coming generations the essence of governance.

Many of them now engage in cyber crimes and they are termed Yahoo boys while those who added ritualism to it are called Yahoo PLUS. The Era where ladies no longer wear panties due to fear of Yahoo boys.

Corruption is therefore adored by the youths in the quest to feed their pockets, therefore they are in bondage.

Some of them who are given the mandate to run the affairs of students’ union engage in stealing, embezzlement and mismanagement to the detriment of their colleagues.

Corruption in Nigeria is not just an act but a way of life. Nevertheless, this should not discourage others who are willing to make the country proud and great again.

If Yakubu Gowon could become the Head of The Country a age 31, Nigerian youths for any office are “Not Too Young To Run”

– Source… The Burden of Irrelevancy