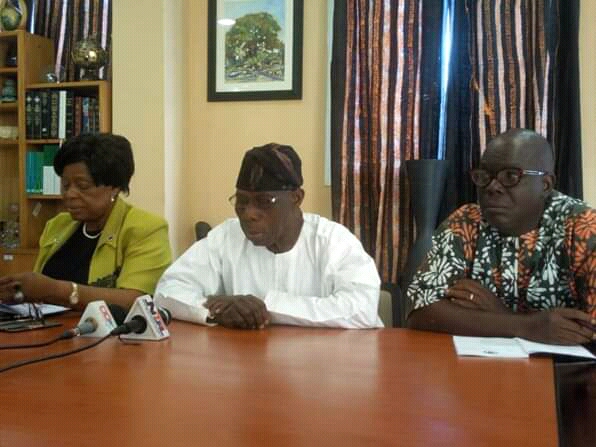 Mrs Buhari in recent time had spoken about her displeasure on how her husband’s government was being run, the latest been the challenge on security apparatus to find solution to the consistent banditry in the country.

But, reacting to the development, Obasanjo, who commended Mrs Buhari for her speaking out said, apparently, the First Lady has not adopted the bedroom approach to get her husband’s attention to the issues.

The former President, who played host to the Editorial Board of the renowned Social media platform, “Penpushing Media” at his Olusegun Obasanjo Presidential Library (OOPL) Board room, advocated for more advocacy and sensitization to get the desired change in the country.

In the release by the Media Aide, Kehinde Akinyemi, Obasanjo added that the media also played crucial role in the mission to turn the country for better.

Obasanjo said the advocacy would raise awareness, “and we have to put all things on table to address these problems. Mind you, we have to be sincere and genuine with ourselves.

“It is nice that President wife is talking, I think she did well, and may be she should also have a pillow talk with the President’

“I believe every Nigerian family, individual, group is entitled to livelihood. It is the responsibility of all to make sure we have a dignify life. That should be our aim collectively,” he said.

Earlier in her speech, Chairman, Editorial Board of Penpushing Media, Mrs Funke Fadugba said the visit was to intimate the former president with the program of events for the 3rd anniversary lecture of the organization scheduled to hold July 19.

She said that the anniversary lecture with the theme “Political Evolution and Multi-party Democracy: Education to the Rescue” has become imperative in view of the developments in the country.

Fadugba said the role of speaking truth to power by Obasanjo cannot be overemphasized, “and, with the statements by the First Lady, Mrs Aisha Buhari, these are commendable efforts, but, one wonders what is really happening. The lecture, it is our belief will go along way to bring the change this country deserves,” she said.

The event, which holds on July 19, at the Marque events center of the OOPL, is expected to have the wife of the former President, Mrs Bola Obasanjo as chairman.

The immediate past National President of the Nigerian Association of Chambers of Commerce, Industry, Mines and Agriculture (NACCIMA), Iyalode Alaba Lawson was also in attendance to support the Editorial Board of the organization at the meeting.

The Editorial board members that were present also include: Eddy Aina, Dr Goke Rauf and the platform founder, Prince Dimeji Kayode-Adedeji while the anniversary planning committee members are: Sina Adefolahan, Siji Oyesile, Bola Solate and Ronald Dansu were present