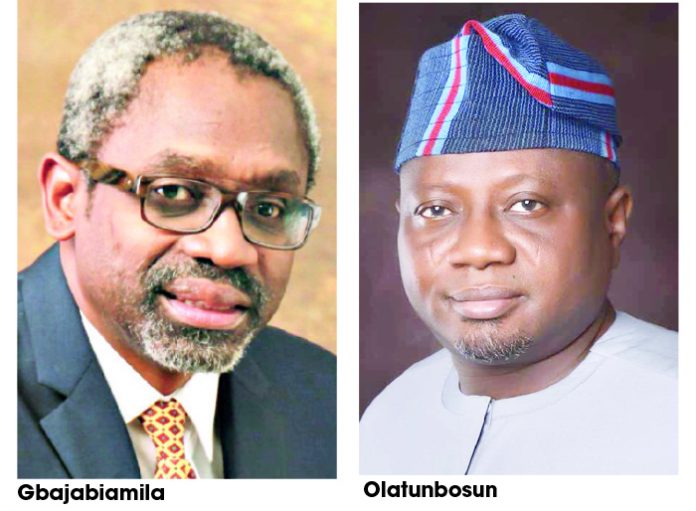 Two major factors will define the contest for the speakership of the House of Representatives, when the 9th National Assembly is inaugurated tomorrow. The two factors are respect for party supremacy on the one hand and the clamour for equity and fair play in the leadership of the green chamber.

These have been the dominant issues, since the campaigns for the speakership seat commenced a few weeks back .However; there is also a subtle campaign for a religious balance in the top positions in the National Assembly.

Among the contestants for the speakership are former House leader,  Femi Gbajabiamila;  Umar Bago, John Dyegh and the former chairman, House Committee on Aviation, Nkeiruka Onyejocha.

Others are the former chairman; House Committee on Information, Segun Odebunmi;  Emeka Nwajiuba and the latest entrant into the contest, Olajide Olatubosun.

The All Progressives Congress (APC) has zoned the Senate presidency to the North East and the position of the speaker to the South West, with former Senate Leader, Ahmed Lawan and former House Leader, Femi Gbajabiamila as its preferred candidates respectively.

But the zoning had not gone down well with stakeholders, within and outside the National Assembly, with a lot of persons kicking against it.

The Gbajabiamila camp is advocating that lawmakers should respect the position of the APC on the zoning of key offices in the National Assembly. On the other hand, Bago, Dyegh, Onyejocha and Olatunbosun are pushing vigorously for equity in the position of speaker and deputy speaker of the House.

Those pushing Olatunbosun’s candidature are positioning him as an alternative to Gbajabiamila, since some lawmakers who genuinely wanted the South West to have the position appear wary of what they call Gbajabiamila’s “moral baggage.”

One of the ex-lawmakers who spoke on the development appealed to the South West lawmakers especially and others from the North and South East, not to collude to deny the South West the position again on the excuse that the party’s preferred candidate is allegedly “tainted.”

“Recall that it was for the same reason they denied us the position in 2011 and 2015 respectively. This time, we are saying if Gbaja has failed the integrity test, as they are saying now, we have a credible alternative in Olatunbosun,” the ex-federal lawmaker, who though lost his re-election bid, said.

He further said “While the president and the leadership of the party reserve the right to take a position, it would not be out of place to quickly remind the authorities that competence, capacity and character cannot be ruled out in the speakership race and that doing everything against voice of reasons and all evidences to the contrary will not portray Nigeria well. Truth be told, electing an internationally tainted personality to the position of speaker will make mockery of our nation and rubbish both virtues and values which the ruling party have long been arrogating to it.

“As an individual, I have long known that the ruling party is out to glorify shitty values, speaking of values and doing the opposite. I’m again vindicated but hope ruling party will have a rethink and not foist a candidate with mounting cases of a prior conviction, identity theft, and most recently, perjury on our bleeding nation.

“In truth, the composition of the house and its leadership is our national identity and the face of the nation. The consequences of a wrong selection at this critical moment when our nation is now the headquarters of poverty and other inhuman vices will rob off negatively not only on the lawmakers but Nigeria, and Nigerians generally irrespective of their political affiliation.

The top echelon of the ruling party and spirited Nigerians must not look the other way. If the ruling party mean well for Nigerians and it is sincere about its public image of fighting corruption and integrity personification, there would not be any need to tell the authorities not to put the interest of anybody above the national interest and identity before the party will tow the path of honour and allow reason to prevail.

“Admittedly, nobody is perfect. Everyone has his or her good sides and the bad. Notwithstanding, the speaker is No.4 citizen of Nigeria. That identity should not be conferred on anyone with integrity questions hovering over him in a nation where we have men and women of honour and genuine integrity.

“Assuredly, with available facts and reports flying around, giving in to filthy candidate who lacks moral mettle and sincerity to lead the House would place another moral burden on the nation and ridicule the legislature before the international community. Against the above premises, President Muhammadu Buhari and the ruling party should live up to their reckoning as anti -corruption czars, and cause security operatives to undertake an in-depth investigations into  Gbajabiamila’s saga and give suitable candidates opportunity to test their strength and luck on Tuesday.”

But Director General of the Gbajabiamila Campaign Organisation, Abdulmumin Jibrin, has since denied every allegation against the former House Leader.

He said: “In the last few weeks, the media has been awash with once again, what has become a reoccurring fabrication of false accusations and outright lies against the person of Femi Gbajabiamila. The latest was a live press conference addressed (last Tuesday) by someone claiming to be speaking on behalf of the Coalition of United Political Party. But for the publicity the press conference attracted, we would have simply ignored the baseless and unfounded allegations.

“For the benefit of doubt, we wish to once again state emphatically clear that Femi Gbajabiamila has never been convicted for any crime in the United States of America, Nigeria or any other country around the world for that matter. He has never been accused of corruption and has no corruption case hanging on his neck in Nigeria or anywhere around the world. He has not committed perjury and has never committed perjury in Nigeria or any country of the world. He was eligible to contest in all previous elections he won and indeed eligible and qualified to contest for the office of Speaker House of Representatives in the 9th National Assembly.”

Jibrin had also while appealing to lawmakers across political divides  to respect the decision of the APC on the leadership of the National Assembly  stated that globally  it is the majority party that decides who emerges the leader of the parliament.

Incidentally, both Gbajabiamila and Jibrin, who is a former chairman of the House Committee on Appropriations, had at various times in the past worked against the decision of the majority party in the green chamber on who becomes speaker. In 2011, the House leader, then as minority leader, had led opposition lawmakers to work against the emergence of Mulikat Akande as Speaker. Akande was the choice of the Peoples Democratic Party (PDP) for the speakership seat in the seventh Assembly.

Similarly, Jibrin had led the offensive against Gbajabiamila in 2015, after the APC endorsed the latter for the speakership. He lost to the immediate past speaker, Yakubu Dogara.

In the aftermath of the announcement of Gbajabiamila as the ruling party’s choice for the speakership,  Bago  had said the endorsement only reflects  the opinion of the APC national chairman, Adams Oshiomhole.

The lawmaker, who spoke through the spokesman of his campaign organisation, Afam Ogene, told journalists in Abuja that the various organs of the party did not meet at any point to agree on a candidate for the speakership.

“We suspect that they tried to ambush Mr. President into the anointing of a candidate. The further question to ask would probably be, at what meeting did the national caucus of the party stay to decide on this adoption, on the zoning first, not to talk of the micro zoning. The party has different strata; the party is not just the National Working Committee (NWC).

“There is a national caucus which comprises Mr. President, Mr. Vice President, the APC national leader, Asiwaju Bola Tinubu, APC governors, BoT members and some other party stalwarts. To our knowledge, no such meeting has ever been called to discuss the issue of zoning, not to talk of micro zoning. So, we would want to know who moved the motion for zoning, who seconded it, who moved a follow up motion for micro zoning and who seconded it; who voted for and who voted against.”

Bago is of the opinion that the speakership should have been zoned to the North Central because of its contribution to the success of the APC in the last general elections. More especially, he believes that since the South West already has the vice president, it will not be equitable for the zone to also produce the speaker.

Dygeh, another aspirant concurs.  He said “the current zoning arrangement is lopsided. It is not fair and that is injustice; that is why we are given the party an option. We are saying the South West already has the office of the vice president. That is okay. That is fine. If reward in politics is about what you bring to the table and you have already given the South West vice president; why would you say that North Central is not good enough for speaker.

“The Senate President in the North Central, in your wisdom, you have taken it to the North East, we do not have problem with that. All we are saying is, if you are taking away number three from us, give us number four and not number six. “

But Olatubosun said there is nothing wrong with the South West occupying the position of the vice president and speaker at the same. He noted that North West held both position recently during the tenure of former President Good luck Jonathan. He maintained that since the party in his wisdom had zoned the speakership to the South West, the decision of who becomes the speaker should be left for the lawmakers to make.

Speaking on his insistence to contest the position despite the adoption of Gbajabiamila by the APC for the position,  Olatubosun said” I will not support any form of imposition.  I am a party man to the core. This is our government. It must succeed.  So for me, I will ensure that we have cordial relationship without compromising the principles of separation of power. The essence of multi party democracy is that it allows choices. Once you take out choices from it, it becomes dictatorship.

“I am a party man to the extent that I will not contravene the provisions of the Nigerian constitution; because the party itself is a product of that constitution. If the party violates it, then everything becomes a nullity.”

But Jibrin said all the other aspirants have valid argument. He however appealed to them to see reasons with the APC and support Gbajabiamila.

“We are talking to them. We are reaching out. We are putting all the cards on the table. They are members of our party and none of them has ever come out to say he is against the position of the party. What they have tried to do is to continue to press for their argument for the party to see reasons with them,” he said, adding that Gbajabiamila’s aspiration is not about him, but the country’s democracy.

As tension continues to mount over the speakership contest, in the next few hours, the 360 members of the House will be voting to decide who leads the House for the 9th Assembly. Will they vote for equity or party supremacy?