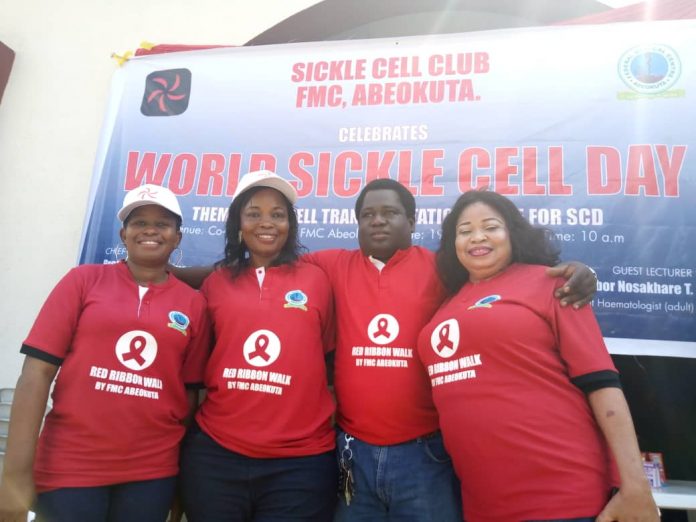 A medical expert and pediatrician with Federal Medical Centre, Abeokuta, Adebola Babajide has maintained that people with sickle cell can live a normal life like the rest of the world.

The pediatrician who spoke with newsmen during the celebration of World Sickle Cell Day with the theme: “Stem Cell Transplantation – Cure for SCD” insisted that sickle cell ailment is not a death sentence as it is widely circulated.

Babajide emphasized that if a patient with sickle cell engages in the normal medical process; such person would live long and engage in normal activities like the physically fit.

He said, “This is a day set aside to celebrate sickle cell, the idea is to create awareness about the diseases and to correct the misconception that exist about it.

“There are a lot of misconceptions, some people think it is a death sentence, anybody with sickle cell diseases are condemn to death, they always believe that they can’t live close to normal life, those are misconception.

“People with sickle cell can live a normal life, they can work, get married and have children and they don’t really have to die.

“We also want to counsel people in making choices about spouses, we can’t force people, but we can guide them so as to avoid it”.

The medical expert however urged the government to provide fiancé and facilities for Nigerians with sickle cell ailments so that they can live long and healthy.

Meanwhile, the members of the Sickle Cell Club had a rally to create awareness at the Federal Medical Centre, Abeokuta to halt stigmatisation against its carriers.

The group maintained that Nigeria remains one of the countries with highest percentage of carriers in the world, stressing that one out of four persons is affected.