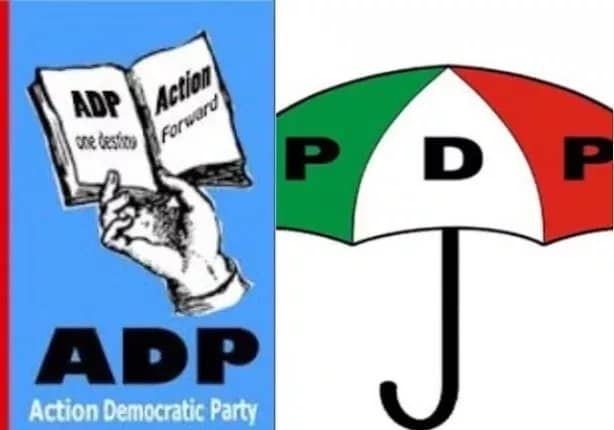 The Ogun State chapter of the Peoples Democratic Party (PDP)
received a massive boost when scores of notable leaders of the
Action Democratic Party (ADP) dumped their party for the
umbrella Party on Sunday, 30th of June, 2019.

The decampes were received by Former Minister and highly respected PDP
Chieftain, Chief Jubril Martins Kuye (JMK) at his expansive Ago Iwoye countryhome.
In his address, the State Chairman of the Action Democratic
Party, Hon. Wale Egunleti described the move as a “return back home”, having gone on exile for a while. He explained that the loads of crisis which plagued Ogun PDP in the past few years was the principal reason for their decision to trade their political business on another platform.
” First and foremost, I wish to commend our distinguished leader and father, Chief Martins Kuye for facilitating this meeting. May Almighty Allah (SWT) grant you long life to help resuscitate Ogun PDP.

For a long time, we had been on exile due to the situation of things in the Party. We were against the idea of handing over the
fate of thousand members of the Party to just an individual. The norms and values of the Party was bastardized and polarized. As peace loving individuals which we are, we decided to look elsewhere in order to avoid being part of the rancour. As a matter of fact, a lot of members, leaders and stakeholders pulled out of the Party then, leaving the PDP in a shadow of itself.
After the general election, we made underground consultations which birthed our decision to go back to our root which is the Peoples Democratic Party (PDP). On the other hand, we admired the persistence and commitment of our leader, Hon. Oladipupo Adebutu before, during and after the general election. Any other
individual could have given up and look for another viable platform to nurse his ambition but contrary to this, he firmly
maintained his stand, stayed through to the course of upholding the leading opposition Party in the State and displayed his massive love for the members by carrying on with the normal activities even after the election. This and other numerous reasons inspired us to have a rethink and decide to be part of this moving train. We are back and back for good. We believe that we’ll be warmly welcomed back home alongside our teeming members across the State”, Hon. Ogunbanjo explained.

While responding, the South West PDP Zonal Chairman, Eddy Olafeso commended the move. He advised that the returnees work hand in hand with the Party’s leadership in order to achieve
the common goal of reclaiming the State from the ruling All Progressive Congress (APC) in 2023.

He said, “Let me start by thanking our leader, one of the founding fathers of the PDP, Chief Jubril Martins Kuye for his efforts in ensuring the resurgence of the Party in Ogun State. May you live long Sir. I sincerely appreciate this new development because it falls in line with our decision at the last NWC meeting where an instruction was given to all Zonal Chairmen to go back home and build a formidable home. No stone would be left unturned. We will make sure that all necessary persons are keyed back into this system because a tree does not make a forest.”

The country is presently in a pitiable condition and faced by many troubles, ranging from Boko Haram killings, banditry, kidnapping to Fulani herdsmen crisis and the ilks. We have concluded that
Nigeria needs to be rescued from the clueless government of the APC which does not have the welfare of people at heart.

On behalf of our National Chairman, Prince Uche Secondus, I welcome you to the Party and I can assure you that this will be
part of my report to the NWC at the next NEC meeting.” The House of Reps candidate of the Action Democratic Party
(ADP) in Ijebu central federal constituency in the 2019 National Assembly election, Hon. Wale Ogunbanjo emphasized the need to work as one family. He explained that it is only in unity that progress can be achieved. Finally, he maintained maximum belief that the PDP would bounce back for victory in Ogun State.

In his remark, Hon. Ladi Adebutu thanked the ADP leaders for making the right decision. He maintained that the PDP was open to all and would do everything to bring back aggrieved members and leaders who had left the party. Hon. Adebutu advised all members to work with sincerity of purpose, honesty and determination, noting that these are the core values of a dedicated, tutored and well nurtured politician. He explained that
the Party belonged to the people and assured that it would be rescued and handed over to people at the grassroot level.

Just In: A yet-to-be-identified Helicopter crashes in Lagos