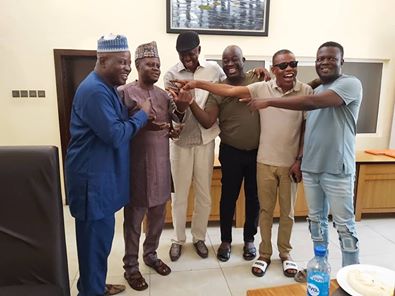 The transport Unions Committee set up by the Governor of Ogun State, Prince Dapo Abiodun, in fulfilling its assignment has restored peace to the lingering crisis among the Stakeholders of the National Union of Road Transport Workers(NURTW).

This announcement was contained in a statement issued to newsmen through the Transport Unions Committee media team in Abeokuta, Ogun State today Tuesday 2nd July, 2019.

The statement reads in parts, “The parley led by the National President of NURTW, Alhaji Usman Nojeem Yaseen, was held in Abeokuta on Tuesday among the Stakeholders from both the National and State leadership of the Union and agreed that Alhaji Akeem Bodunrin (Iyeru) becomes the Acting State Chairman while the immediate past Chairman, Alhaji Akeem Adeosun popularly called JANGO moves to the National Secretariat as the National Trustee “.

” Therefore, Alhaji Akeem Bodunrin popularly called IYERU will henceforth control the affairs of the NURTW pending the time substantive election will be held to fill all the available offices”.

“This move was to foster unity among the Stakeholders and ensure security of lives and properties at our parks, garages and the State in general”.

Stakeholders present at the parley were Azeez Bankole (Alameda), Keshinro Monsuru(Sir Kesh), Yusuf Murtala among others.

How To Reduce Your Bank Charges