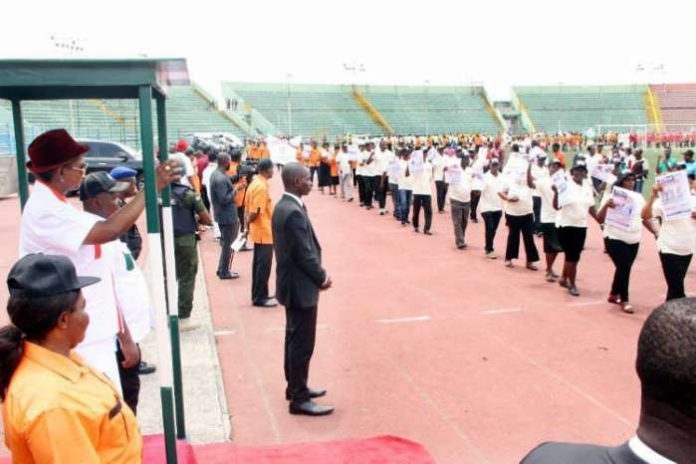 The Rivers State Government says it has lifted the ban on promotions in the Civil Service.

Represented by his Deputy Dr. (Mrs) Ipalibo Harry Banigo, Governor Wike said the Chairman of the Civil Service Commission had already been directed to conduct interviews and effect the promotion of Civil Servants to their next salary grades, noting that he has also approved the recruitment of Rivers indigenes to fill existing vacancies as part of efforts to strengthen the Civil Service for effective service delivery to the Rivers People.

Governor Wike said the Government under his watch is committed to tackling social issues by creating the enabling environment for the private sector to create jobs and empower our youths.

“We are also strengthening our educational system to ensure that our graduates are imbued with appropriate skills and the mindset to become job creators rather than job seekers and will also continue to implement effective policies and programmes that will address and lift our people from poverty to economic prosperity” Governor Wike further stressed.

The State Chief Executive also disclosed that Government has started implementing the N100, 000,000.00 interest free-loan to Civil Servants in a bid to advance the welfare and wellbeing of Civil Servants.

Governor Wike promised to pay the new minimum wage as soon as he receives the official transmission from the Federal Government while noting that the Pension Reform Bill before the State House of Assembly when passed into law would bring into existence a seamless and positive scheme for workers in the State.

The State Chief Executive who described his administration as worker-friendly said despite financial challenges his Government is up to date in the payment of full salaries and pensions to working and retired Civil Servants, stressing that his promise to construct befitting Secretariats for the State Chapters of the Nigerian Labour Congress and the Trade Union Congress has been fulfilled and will soon be handed over.

In her address the State Chairman of the Nigeria Labour Congress Comrade Beatrice Itubo who congratulated Governor Wike and his Deputy for their victory at the election said the election was a referendum on the performance of Governor Wike in the last 4 years, noting that the victory was an indication that a large number of the voting public in the state are happy with the Governor.

It would be recalled that the 1st of May each year is set aside to commemorate the International Workers Day also known as May Day the Theme for this Year’s Workers Day Celebration is “Another 100 years of struggle for job, dignity and social justice in Nigeria”