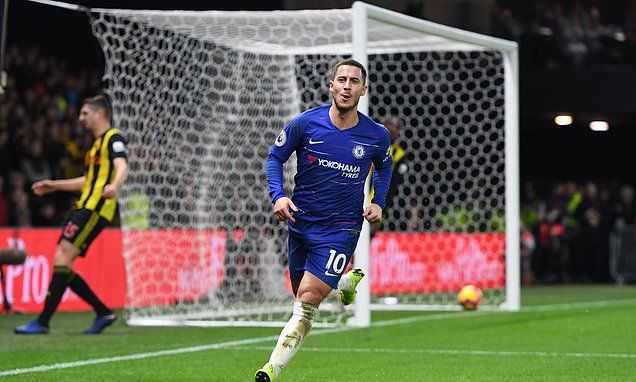 Real Madrid have finally decided when to unveil star player, Eden Hazard, after reaching an agreement with Chelsea to sign the forward.

According to HLN, Real Madrid will officially sign contracts and unveil Hazard after Belgium’s Euro 2020 qualifiers later this month.

The Belgian newspaper claimed that the La Liga giants and the Blues have agreed to negotiate, with the Santiago Bernabeu club willing to pay €120million (£106million) for the Belgium captain.

This is coming after Real Madrid completed the signing of £52million striker, Luka Jovic from Frankfurt on Tuesday afternoon.

Hazard has been on manager, Zinedine Zidane’s summer wish list as he plans to bolster his squad ahead of next season.

The 28-year-old, who will be wearing the No. 7 shirt at Madrid, said “goodbye” to Chelsea fans, following their Europa League victory against Arsenal last week.

Speaking after Chelsea’s Europa League 4-1 win in Baku on Wednesday night, Hazard told reporters: “I’ve made my decision and I told Chelsea two weeks ago.

“I’m just waiting on both clubs to decide now.

“I think it’s a goodbye. I’ve done this for 7 years and now it’s time for a new challenge