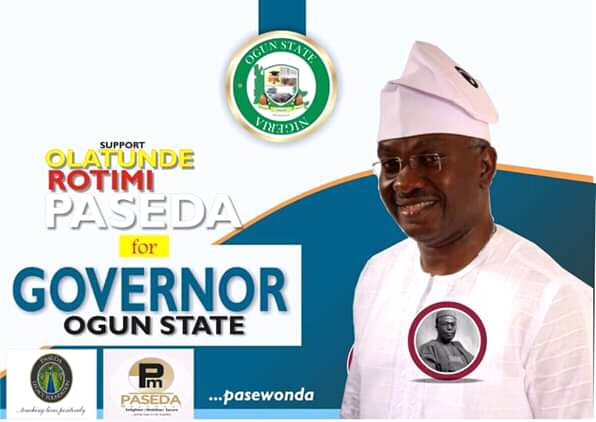 The Ogun governorship candidate of the Social Democratic Party (SDP), Otunba Rotimi Paseda, has pleaded with the Independent National Electoral Commission (INEC) to immediately release his Permanent Voter’s Card (PVC) to allow him participate in the forthcoming elections.

Otunba Paseda made the appeal on Tuesday while addressing journalists at the party secretariat in Abeokuta, the Ogun state capital.

The governorship candidate explained that, he approached the electoral body in Odogbolu local government area of the state narrated for replacement of his peeled PVC.

He argued that, the electoral officer in charge of the local government, Mrs. Akinwande who demanded for his damaged PVC to allow the commission reproduce a new one for him.

He said after several attempts to collect the PVC, the commission told him as PVC was not produced as his data could not be  found on their database.

“I noticed that the back code at the back was stripping off, and broken into pieces, so I went to INEC myself, my wife, my son my staff, it’s about 15 of us and my sister, went there together, some of them did a change of residence and I did a replacement application, a lady there collected the old defaced PVC and gave me a form to fill and said it will be reproduced in a few weeks time, since then almost initially about every two weeks and since last month every two days, I have been stepping in there or sending someone to collect my PVC, they keep telling me it has not been produced, it is coming in the next batch, now the last batch has come,

“The funny thing about it is that my wife has gotten hers, my son has gotten his, everybody else that went with me that day have gotten their card except my ward chairman (Mrs Jumoke Olabode) and myself, and we all did it together in the same office” he recounted.

The governorship candidate, added that the excuse given by the electoral commission is that they had no data to produce another one for him.

“So the excuse I was given I recorded the conversation was that it was not produced there is no data, I don’t understand how come there will be no data, I voted in 2015, it was the card that was produced and given to me by INEC, so how come between then and now, there is no data and between then and now, my card was miraculously unavailable” he said.

He, however said that he will not be stopped from performing his statutory duty from electing the candidates of his choice during the coming presidential election and governorship election even if he was not contesting.

“Even if I was not contesting, I will do this because I must vote, I must choose who I want as governor, election is on Saturday, the presidential election, I have a choice, I must decide who I want to vote for between the two”

He said “I have written a formal letter to INEC (ìn Ogun state and Abuja) demanding that they immediately release my Voter’s card because when I got to their office today, I actually discovered that quite a lot of Voter’s card had not been collected and they were packing and wrapping it in a cellophane, it is a bit odd”

He, however alleged fears that the forthcoming polls might be rigged with the number of uncollected PVCs and has been spread around.

“So there has been rumour that this is the beginning of rigging, some of the uncollected cards are going to be sold to some political parties, whom I don’t know but I am sure that my card will not be used by somebody else or for them to stop me from voting”

We  also report that Otunba Paseda said there was a conflict of information between the INEC Electoral officer, Mrs Akinwande and her staff, called Sam.

“The E.O said and I quote, it wasn’t my fault, if it hasn’t been produced, I cannot give it to you but Sam said, all the PVCs were produced and sent to us but I don’t know why money was not there. So the surbodinate and the E.O were saying two different things”