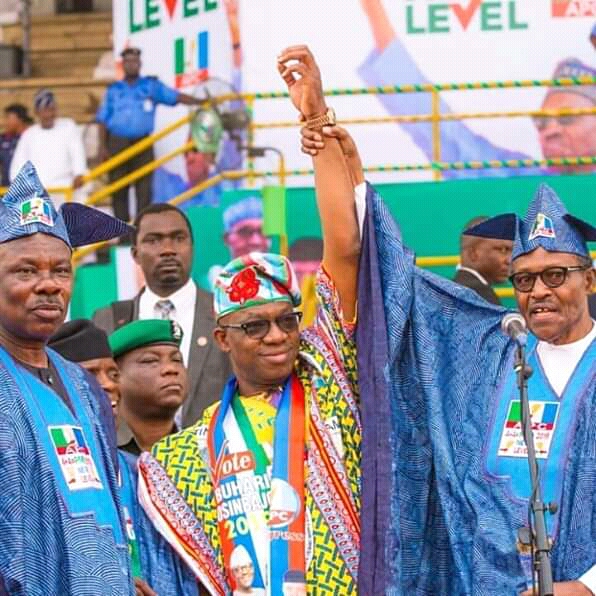 The dreadful display and show of shame by the Ogun State Governor, Senator Ibikunle Amosun (SIA) as well as the unforgivable disregard to the office and person of the President of the Federal Republic of Nigeria by his cohorts yesterday in Abeokuta, during the rally of the Presidential Candidate of the APC, President Muhammad Buhari, GCFR, is well documented in the history books of Ogun State.

In what appeared to be a battle of wits, the sinking Governor orchestrated and hatched a plot to undermine the party’s leadership and prevent the ‘traditional presentation’ of the party’s flag bearer in the March 2 Governorship election in Ogun State, Mr. Dapo Abiodun by the President. The idea was to confirm to Mr. President, Dapo Abiodun’s unpopularity and to indicate that the party control in the State, despite the reality which proves otherwise, is domiciled with him ( SIA).

However, the popular Yoruba adage which says ‘agbalagba to ba n yo’le day, oun buruku a maa yo iru won se’ meaning, when you plot the downfall of someone, you may find yourself in the pit you dug, came to the fore as the now unpopular Governor Amosun completely lost control, thereby turning the heat upon himself in the process.

As it often pans out for mischief makers, the resultant effect of the action which was the pelting of stones and sachet water on Mr. President, his Vice and other leaders of the APC, by some unruly and unscrupulous, albeit sponsored thugs, whose master could no longer control, despite his many pleas, is that Amosun disgraced himself and not the good people of Ogun State.

The implication of this is that, the good people of Ogun State must rise in support of Dapo Abiodun against the Crooked Governor who appears to be hell bent on disgracing himself out of office. As a matter of fact, he has, by his actions, destroyed his political future.

Ogun State has not only been renowned for its peaceful and tranquil nature and people, it has, as citizens, highly educated, famous, disciplined and intelligent sons and daughters who have travailed the length and breadth of Nigeria and beyond. Therefore, we must rise against indecency, thuggery, tyranny and see today’s actions as unbecoming of a supposedly civilized Governor and together, rescue our dear state from the ’emperor’s’ hands.

Lockdown: So – Safe Corps Arrests Two for Stealing Petrol in...