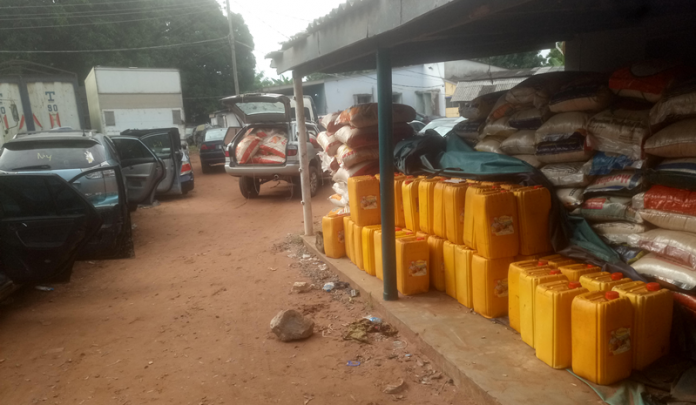 The Ogun State Area Command of the Nigeria Customs Service, says it intercepted 7,030 bags of smuggled foreign rice, and 38 used vehicles popularly known as Tokunbo, among other seizures in the month of May 2019.

The Controller of the command, Michael Agbara, disclosed this on Tuesday at the Idiroko border office of the command in Ipokia Local Government Area of the state.

He said the seizure of over 7,000 bags of smuggled rice(50kg) was the highest monthly seizure so far made in 2019 by the operatives.

Agbara who said the command recorded revenue totalling N1,131,800,165.10 within the period under review, added that other seizures made were 411 kegs of Premium Motor Spirit(petrol), 372 kegs of vegetable oil, and one sac of secondhand clothing.

Others were 1,835 pairs of new shoes, 264 pairs of used ones, motorcycles and bags of sugar.

Agbara said Customs operatives in the command made the seizures across the state, majorly in the creeks of Ipokia, Imeko Afon, Ilase, and Ihunbo among others.

Agbara said, “The command has really intensified its efforts at curbing all manners of smuggling in Ogun State.

“The seizure of over 7,000 bags of rice for the month of May 2019 is the highest monthly seizure of rice made by the command during the 2019 fiscal year. It is unprecedented.

“We have been able to reduce smuggling to the barest minimum in the state because we are not compromising. We want to tell the smugglers that Ogun State is no go area.

“Smuggling is against the economic development of the country. By smuggling, we are creating jobs for people in other countries.

Agbara who commended the officers and men of the command for their gallantry and added that they would continue to engage, sensitise and educate the public on the socioeconomic implications of smuggling.

Salary Increment Is A Routine Exercise In Lagos State – Information...