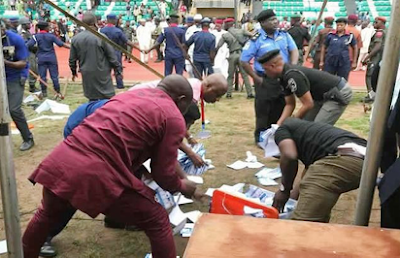 Nigerians have taken to social media, to voice their shock and apprehension, after President Muhammadu Buhari’s comments during the All Progressives Congress (APC) caucus meeting on Monday.

At the meeting which was televized live, Buhari made it clear that anyone who tries to disrupt the electoral process, will be doing so “at the expense of his own life”.

The President said he has given instructions to security agencies, to ensure the general election goes on smoothly.

“I will warn those who have planned to disrupt the peaceful elections to desist from their planned actions.

“Anyone who tries that is doing it at the expense of his own life,” President Buhari said.

Here are some of the reactions as gathered by Tropic Reporters News (www.tropicreporters.com) off Twitter:

@bobskino: Do we still need a constitution like this? Since we ‘re just following the orders the president is dishing out

@nnabros: This is simply an excuse to shoot whoever they want. After you die, they will put ballot box next to your body.

@inibeghe_imeh: I wonder how Nigerians thought this man was the best head for the Presidency in 2015……imagine @MBuhari threatening to take peoples’ lives.

@yinkaisola14: Only ballot box snatchers should be afraid of this statement.

@CAPT_Vincentt: Buhari’s ambition is worth anyone’s life, he doesn’t care.

@uchesame: Tyranny runs in this man’s blood. Man is issuing threats and inciting violence with boldness. Buhari will never change.

@AdeBanqie: I love the way Buhari spoke at the APC Caucus meeting as regards those who want to foment trouble during #NigeriaDecides2019

@Ifeabunike: Buhari ordered security operatives to summarily execute those found liable in election infractions. This is less than 24 hours after a Nigerian Customs officers summarily executed a man he had arguments with. How would we know that those try kiled really did electoral malpractice?