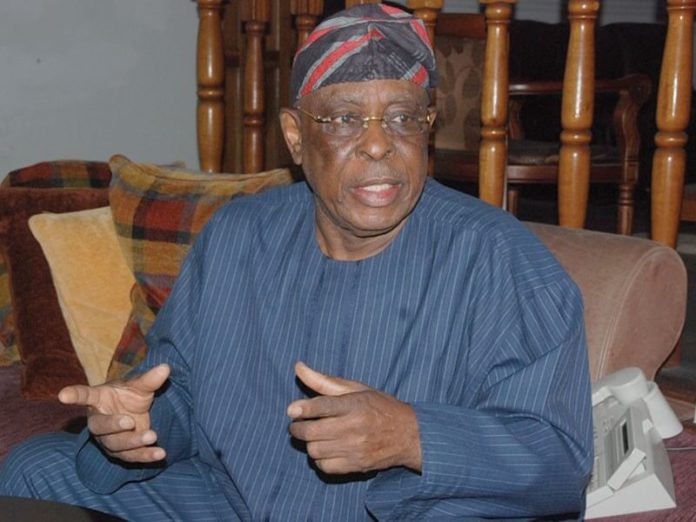 Former Ogun State Governor, Olusegun Osoba has begged members of the All Progressives Congress (APC) to vote for Governor Ibikunle Amosun and put behind the attacks on the party’s campaign rally in the state

Osoba said this while stating that none of the thugs involved in the attack have been arrested.

The former Governor further begged APC supporters in the state to leave vengeance to God and vote for all APC candidates, including Amosun,The Nation reports.

Amosun, who is APC candidate for Ogun Central is backing the Allied Peoples Movement (APM) governorship candidate, Adekunle Akinlade to succeed him against APC’s Dapo Abiodun.

He said: “Yesterday, I told stakeholders in Ogun state that on no account should anybody vote against Amosun as a person.

“A governor is a governor and he will be in office till May 29. So, why are we worrying ourselves?

‘Amosun is just an individual. I still respect him as my governor up to May 29 this year and will not do anything to undermine him as governor.

“I was governor twice. I told our people that vengeance is not ours and that nobody should go for vengeance.

“Amosun is just a person but the office of the governor deserves respect and I give respect to that office.

“Ogun state is first in several areas. The leaders of the progressives in this country are from that state and it is the home state of the Vice President.

“I told the President that I apologised to him and that uptill today, nobody has been arrested. I see that as a failure on the part of some elements of the security agencies.

“Actually, the bulk of APC in Ogun state, we are one family and instruction has gone out that despite what has happened, we should vote for APC candidates at all levels and when the result is out, it should reflect that.

“At least we should respect the Vice President, who is busy preaching welfarism for the downtrodden and I am sure that appropriate action will be taken on that issue later.