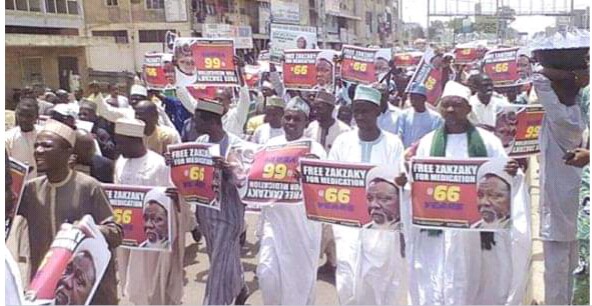 Members of the Islamic Movement of Nigeria (IMN), otherwise known as Shiites, yesterday stormed the Federal Secretariat and Central Business District (CBD), Abuja demanding the release of their leader, Ibraheem El-Zakzaky. El-Zakzaky has been in custody of the Department of State Services (DSS) since December 2015 on the order of the Nigerian government.

The group, numbering over 100 and who were mainly youths and some adults protested along the Federal Secretariat Complex and the Central Business District chanting a song: We Are Ready To Die For El-Zakzaky and disrupting the free flow of traffic in the areas.

We learnt that although the protests have been peaceful, they witnessed heavy presence of policemen and officials of the Nigeria Security and Civil Defence Corps (NSCDC).El-Zakzaky and his wife were detained after clashes between its members and the Nigerian Army in December 2015 leading to the death of over 300 Shiites including women and children.

After his detention, the Federal Government failed to file formal charges against El-Zakzaky but rather appealed a December 2016 court order for his release. Government has also flouted other court rulings in favour of the Shiites’ leader’s release.

Following government’s refusal to release El-Zakzaky, Shiite members began a daily protest in Abuja and parts of the North.