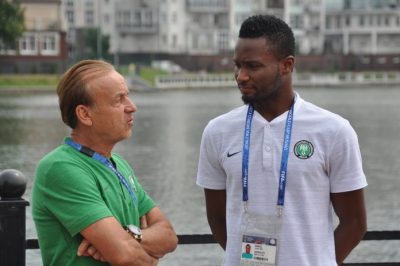 It should be a battle-royale tomorrow as Nigeria faces Madagascar in the final Group B match of the Africa Cup of Nations.

As earlier exclusively broken by www.sportsvillagesquare.com when the draw was conducted in April, Rohr will be incurring the wrath of his in-laws tomorrow.

Unknown to many, Super Eagles coach, Gernot Rohr is married to a Madagascan wife, who runs a hotel business for him in the French Island of Reunion, which is close to Madagascar.

Not much is known about his wife as Rohr, like many coaches, keeps his personal life out of public view. Sports Village Square can, however, confirm he has two sons, Oscar Rohr and Emmanuel Rohr. The later is in football management. Rohr came into contact with Africa through Reunion in 2001 after his French friends told him of the serenity of the island. It was then he opened his first hotel there and once said he would settle there one day.

On the surface, it looks an ordinary match, but www.sportsvillagesquare.com sees a more in-depth view of the match.

It pitches the two topmost chieftains of CAF against each other. As already known, CAF’s president, Ahmad is from Madagascar, the country that is debuting at the premier continental soccer championship.

His next in command and one of those who worked to get him elected in 2017 is Amaju Pinnick of Nigeria, whose team, Super Eagles has intention of winning all matches to reassert its position in Africa.

At least, for once, the bond that ties Ahmad and Amaju will momentarily be broken tomorrow.