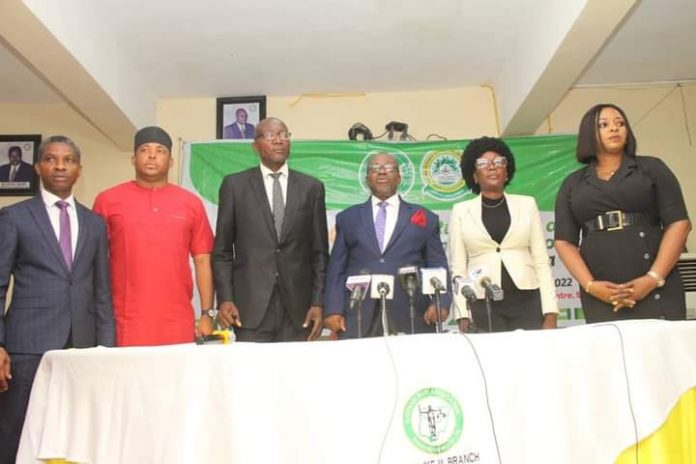 The Nigerian Bar Association Section On Public Interest and Development Law has condemned the attempt by the National Assembly to criminalize ransom payment by families of victims of kidnapping.

NBA-SPIDEL says this those who pay such monies do so out of desperation because of government’s failure to secure lives, which the Legislature must address instead.

This position was revealed by the Chairman of the NBA-SPIDEL, Monday Ubani in Lagos.

The gathering was geared at updating journalists on NBA-SPIDEL’s forthcoming national conference to be held in Sokoto State between May 22 to 26, 2022, on the theme: Rule of Law and the Democratic Evolution in Nigeria”.

But, the NBA Section tasked with serving public interest also spoke on some pressing national issues.

One of them is the Nigerian Senate’s passage of a bill imposing a minimum of 15-years in jail for anyone who pays a ransom to free a kidnap victim, as a way to “discourage the rising spate of abductions in Nigeria”.

But Dr Ubani called the move a suicide mission.

“It is very appalling therefore that the same country that has failed to provide security to the people it governs is embarking on a ‘suicide mission’ of criminalizing ransom payment by the very victims that are helpless and desperate to save the lives of their loved ones. This piece of legislation under contemplation lacks logic and wisdom and the House of Representatives is hereby advised jettison the Bill without any further consideration. It does not make any sense at all! Instead, the Legislature is strongly advised to focus on laws that will strengthen national security and protection of lives and property, assuming there is a lacuna.”

NBA-SPIDEL also urges Nigerians to be alert on their choice of the next president in 2023.

According to its Chairman, “I dare say Nigerians are shocked at the number of presidential aspirants buying Expression of Interest forms from their various parties at very exorbitant fees. At this juncture, what we advise is that Nigerians should be alert and ‘shine their eyes’ in order to avoid the grave error of the past.

We must separate the wheat from the chaff, pretenders from contenders. Our wrong choices of the past have kept us where we are today – retarded. It will be a colossal disaster if after passing through the harrowing experiences of the past years due to wrong choices, we make the same mistake in 2023 by choosing most of the jesters who are parading themselves as presidential candidates.

We refuse to believe that Nigeria is under a curse of bad leadership. If there is any curse, let us consciously and vigorously break the yoke of that curse collectively and choose a destiny of progress and growth. Let Nigerians arise from slumber and insist on leadership with antecedents, a leadership that can take us to our desired destination. It is possible if we collectively push for it. May God guide us on this noble cause.”

The state of the rule of law and preparations for the 2023 general election in Nigeria are among themes that will be addressed at the Sokoto Conference. Several eminent speakers, including the Chief Justice of Nigeria, Justice Ibrahim Tanko Muhammad and the NBA President, Olumide Akpata are billed to attend. The keynote Address will be delivered by renowned jurist and former Vice Chancellor of the University of Ado-Ekiti, Prof. Akin Oyebode.

Kidnapping for ransom is a major security and societal problem in Nigeria and has grown from being initially localised to the NorthWestern part of Nigeria to all parts of the Country.

Kings, Politicians and the Common masses have all suffered abduction for ransom in the recent past with several high profile abduction including the Chibok Girls in 2014, the Dapchi girls in 2016 and the recent Train Attack and abduction in Kaduna State.

Over 100 persons are still unaccopunted for in that attack blamed on a growing collaboration between bandits and terrorists of the Boko Haram /ISWAP.