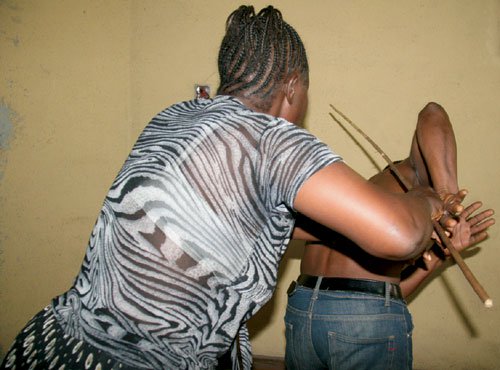 A middle age woman, Mrs Ajoke Adebayo has been arrested by the men of the Ondo State Police Command for allegedly killing her 14-year-old son, Matthew Adebayo.

It was gathered that Mrs Ajoke was arrested alongside her brother-in-law, Mr. Idowu Adebayo for his alleged involvement in the torturing to death of Matthew, a JSS 3 student who was accused of allegedly stealing the sum of N21,000 from his mother’s bank account.

The incident, which happened in Oda area of Akure, the Ondo State capital, has thrown the entire community into mourning.

Narrating the incident, an eyewitness stated that after the mother of the deceased discovered that her son had stolen money from her bank account, she called her husband, Ayodele Adebayo, a police officer to inform him about the deed of his son.

Adebayo, who is serving in another command outside the state, was alleged to have ordered his brother, Idowu to discipline the deceased.

“The woman (Ajoke) called her husband, informing him about what the son did, so the husband then called his younger brother to discipline the boy.

“It was the boy’s friends in the area that called the attention of the neighbours to the torturing of the boy.

“Later, when they opened the door, where he was locked in, he was already unconscious and was rushed to the hospital where he gave up the ghost,” the eyewitness said.

Another resident of the area who craved for anonymity, also disclosed that “immediately, the men of the state police command were invited to the scene and later arrested the two suspects.”

Confirming the incident, the state’s Police Public Relations Officer, PPRO, Femi Joseph, said that investigation had already commenced and efforts were on towards arresting the father of the deceased.

“We have arrested the two suspects and very soon, we will arrest the police father who gave the order to beat the boy.

“He is not serving in our command here but he would soon be arrested,” the PPRO stated