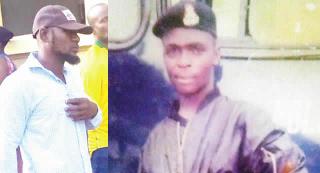 
Justice Olabisi Akinlade of the Lagos State High Court, on Wednesday, sentenced the Chairman of the National Union of Road Transport Workers, Boundary/Ayetoro unit in Lagos, Saheed Arogundade, to death by hanging for killing a police officer.

Justice Akinlade convicted Arogundade after finding him guilty of conspiracy and murder of the officer, Gbenga Oladipupo.

Saheed was charged alongside five others on two counts of conspiracy and murder.

We learnt that the deceased was killed on April 10, 2010, around 8am at the Gbara junction in the Ayetoro area of Ajegunle, Lagos.

It was gathered that the deceased was stabbed to death by Saheed and his cohorts while on his way to visit his mother on Olayinka Street in the Ayetoro area.

Our correspondent learnt that the convict and his accomplices killed the deceased for encouraging the operation of tricycles in the area, which the convict noted would reduce the income of the NURTW unit.

During trial, the second prosecution witness, Ismaila Lukman, who was the motorcycle rider conveying Oladipupo at the time of the murder, gave a vivid account of the incident before the court.

He had said, “The deceased had called me for a ride to his mother’s house when four men approached us and dragged him down.

“One of them, Saheed, brought out a knife and stabbed him in the back. I ran off to seek help from other motorcyclists, but when I returned, I saw the other three men hitting the deceased with their fists.

“I couldn’t see the faces of the other men clearly because I was gazing at Saheed, who stabbed the victim. When I got close to the deceased, I realised that he had been badly stabbed all over his body and was bleeding profusely.”

In the three-hour judgement delivered by the judge, she held that the prosecution was not able to prove its case against the other defendants.

She further held that the evidence of the sixth prosecution witness, one Adewale Akinola, could not be used to convict the second to the sixth defendants.

Justice Akinlade said, “The PW6 was not directly at the scene of crime but was standing in front of his house and the object that he described as being used by the assailants on the deceased was different from the weapon described by the pathologist.

“The PW6 claimed that it was a machete used in stabbing the deceased; so, I hereby rule that the PW6 is not a reliable witness. The only evidence the court will rely on is that of the PW2, whose evidence was cogent and convincing.

“The evidence of the PW6 is not sufficient to convict the defendants; the court believes he was not being truthful. The police did not conduct a serious investigation to determine if the fifth and sixth defendants were at the scene of the crime.

“I hereby acquit and discharge the second to the sixth defendants in respect of the charges.”

While convicting Saheed, Justice Akinlade held that the prosecution proved beyond reasonable doubt that he killed the officer.

She said, “The prosecution has proved beyond reasonable doubt that the first defendant killed Gbenga Oladipupo. The first defendant did not act alone, but since the PW2 did not recognise the second to the sixth defendants, they are acquitted of the two counts.

“I hereby pronounce the sentence of the court upon you, Saheed Arogundade, that you will be hanged in the neck until you are dead. May God have mercy on your soul.”