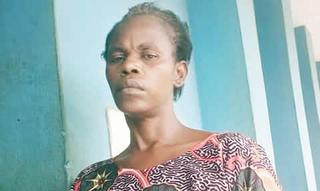 The Operatives of Ogun State Police Command, on Wednesday 6th February, 2019 arrested a 47-year-old housewife, Joy Egeonu, for allegedly beating the 11-year-old nephew of her husband, Chibuike Egeonu, to death over an allegation that the deceased stole her N6,500.

According to the information made available to newsmen in Abeokuta by The Police Public Relations Officer in the state, DSP Abimbola Oyeyemi stated that the suspect was arrested following a report by the mother of the deceased, Ijeoma Egeonu, at the Agbado Divisional Police Headquarters.

The Police Spokesman  said the deceased’s mother told the police that her son, who was living with her elder brother and his wife at Ope-Ilu in Agbado, Ifo Local Government Area of the state, was beaten to death by Joy.

Oyeyemi stated that the incident happened on February 3, 2019, adding that Joy took the boy’s corpse to Ifo, where she hurriedly buried him.

He said, “On the strength of the report, the DPO, Agbado Division, CSP Omonijo Olatunji, led his detectives to the scene, where the woman was promptly arrested.

“On interrogation, the suspect claimed to have suspected that the boy stole her money, which prompted her to flog him to the point of him going into coma.

“She further stated that the boy gave up the ghost while she was taking him to the hospital and that it was later discovered that the missing money was taken by her husband and not the deceased as initially suspected.

“She has since taken detectives to where the boy was hurriedly buried.

“Meanwhile, the Commissioner of Police, Ahmed Iliyasu, has ordered the immediate transfer of the suspect to the homicide section of the State Criminal Investigation and Intelligence Department for further investigation.

“He equally ordered the arrest of the suspect’s husband, who assisted in burying the boy, in order to cover the criminal act of his wife.”