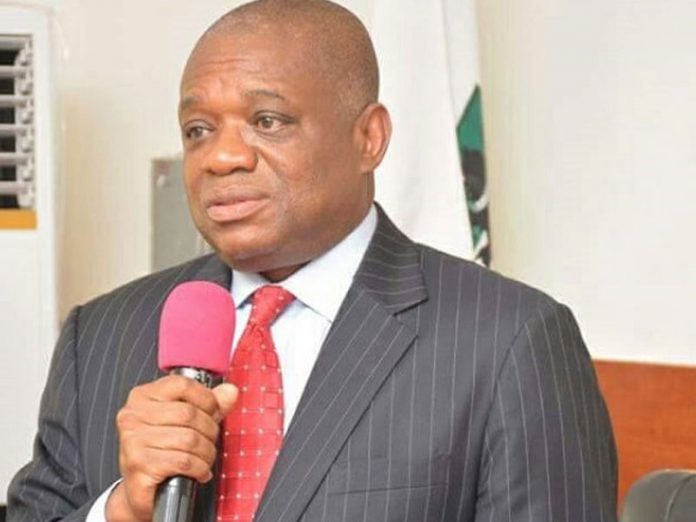 Kalu said Buhari’s intervention had become imperative to avert animosity that could divide the party; just as he intervened in the Senator Danjuma Goje and Senator Ahmed Lawan’s bid for the Senate Presidency.

Kalu who made the call on Friday during an interview at the Murtala Muhammed Airport Terminal Two (MMA2), on his way to Abuja, said President Buhari should call the feuding party chieftains to order to avoid further bickering capable of eroding the gains of the party’s victory in the last elections.

He commended Buhari for prevailing on Senator Danjuma Goje to step down for Senator Ahmed Lawan as candidate for the Senate Presidency and noted that such rapprochement was critical to ensuring the party speaks with one voice on such critical issues that affect the party.

“What Oyegun and Oshiomhole are doing is part of democracy. But we have called on Mr. President to intervene; just as he did in the Goje and Lawan matter. If President occasionally intervenes in this kind of issue, we will not be having problems. In PDP, there are bigger problems but they intervene and settle the matter. Before, President will tell you, I don’t want to play politics but he is the chief politician.

I think the President has started changing about that his position. I am sure, we will sort out Oyegun and Oshiomhole’s problems by next week. I am sure Mr. President is already doing something on that matter. And I want to make it clear; people should not be misleading people by saying what the President did not say. I advise that Nigerians should not be misleading the public with what the president never said,” Kalu stated.

Kalu advised APC members to desist from using the name of Buhari to entrench their personal and selfish interests, saying presently, many politicians were using the President’s name to pursue causes that Buhari has not endorsed.

He said he endorsed Lawan and that his endorsement of Lawan as President of the Senate was driven by deep convictions about Lawan’s capacity to push for robust leadership that would deepen the political and economic space for the prosperity of Nigeria and Nigerians.

He restated his clamour for position of Deputy Senate President to be ceded to the South East region, saying it was only godly, morally and in line with the principles of equity and justice to do that. He said that it was not about self-interest but to ensure geo-political balance.

On his bid for Deputy Senate President, Kalu said, ” I am not only restating it but I am saying that it is the most Godly thing to do because I am ready to do that job to help both the Senate in law making and help the executive to be able to bring stimulus that would fix the economy. I am interested in the economy because if we hit the economy right, the security will be addressed. I think a hungry man is an angry man. So we need to also be looking at candidates that have capacity to do the work. And I have capacity to do the work. I have capacity of managing human beings and the Senate is about human management.”