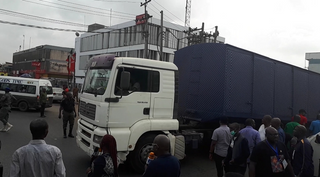 The Independent National Electoral Commission has begun the distribution of electoral materials for the rescheduled general elections in Edo State to the 18 local government areas of the state.

The first batch of the materials left the Benin branch of the Central Bank of Nigeria in a blue truck at about 9:30am.

The truck was accompanied by some buses conveying security personnel and political party agents.

Although journalists were not allowed into the premises of the CBN to speak with the Resident Electoral Commissioner, Mr. Emmanuel Alex-Hart, on the destination of the truck, it was learnt that the first set of materials would be moved to councils in Edo North senatorial district, due to the long distance.

The materials were being loaded into another truck under the watch of security and party agents as of the time of filing this report.