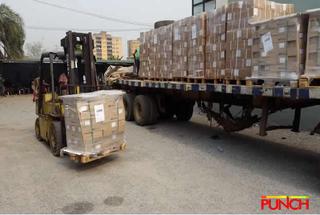 Some result sheets for the presidential and National Assembly elections meant for Imo State had been found missing by the Independent National Electoral Commission.

The result sheets were subsequently discovered to be in Gombe and Ondo states. Similarly, some results sheets meant for Gombe State had been found in Imo State.

The missing results sheets, as well as the ones that were mixed up, came to the fore when stakeholders examined sensitive electoral materials that were retrieved from different registration area centres in the state in Owerri on Tuesday.

Our correspondent learnt that it was during the verification of the materials that some Gombe result sheets were found in the state while some materials for Imo State were discovered to be missing.

Necessary arrangements were said to have been put in place to retrieve the materials and also to send the Gombe result sheets to their appropriate location.

Call to confirm the incident from the INEC REC proved abortive as his phone rang out.

He had also yet to reply a text message sent to his mobile phone as of press time.

However, Chairman of IPAC in Imo State, Mr Ben Duru, confirmed the development in an interview with our correspondent.

He said, “The result sheets were packed in cartons and when one carton was opened, it was found to belong to Gombe. One or two wards in Aboh Mbaise were also found to be missing which were confirmed to have been packed for Gombe. The REC quickly contacted and planned how to return the result sheets and how we would also receive our own.”

Duru dismissed insinuations from some political parties that the integrity of the electoral materials may have been compromised.

He said during the verification that lasted till 9pm on Tuesday, all the materials were found to be intact.

He said, “We verified the materials that had been despatched to the RACs and retrieved. We verified them and they were okay. Nobody touched anyone. Thank God, some of the materials had not got to the Local Governments Areas before the elections were put off.

“Very few of the materials had got to destination. Some were still on the way when the announcement was made. The REC quickly called back the materials. So, yesterday we started by looking at those ones first. After that, we sorted out the new ones that were brought later.”

Also, there was a mild drama on Wednesday at the Central Bank of Nigeria branch in Dugbe, Ibadan, the Oyo State capital after the Form EC 8B of INEC meant for Kano State was found among the materials in the CBN.

The form, which is one of the sensitive election materials, is the result sheet for a particular ward within a state.

While our correspondent was moving round the CBN premises around 5.30pm to monitor the sorting of the materials, a group of INEC officials, including ad hoc ones, suddenly raised the alarm.

“Eh! For Kano…noted,” they exclaimed as a woman raised the form.

One of them subsequently took the form to a superior INEC official, who documented it in a register.

Efforts to get the comment of the INEC Head of Publicity in the state, Mr. Olayiwola Awolowo, on the development proved abortive as calls made to his line were not answered.

The Resident Electoral Commissioner in the state, Mr. Mutiu Agboke, had also yet to reply to a text message sent to his line as of the time of filing this report.

Earlier while addressing journalists, Agboke said the sorting and documentation exercise were being painstakingly carried out to avoid mix-up.

He said, ‘’The exercise will be on till tomorrow (Thursday) and each of the vehicles with the materials will leave CBN to INEC state headquarters to pick Smart Card Readers proceeding to their respective destinations.

“Each of the vehicles carrying the materials will be escorted by armed security personnel, for the safety of the materials.”

The REC added hat all the materials needed for the Saturday polls were adequate, saying the commission was ready to conduct transparent and credible elections.

In a related development, INEC Resident Electoral Commissioner in charge of Kwara State, Mallam  Attahiru Madami, said that the result sheets meant for the state were mistakenly taken to Abuja.

Similarly, he said some meant for Lagos were mistakenly delivered in Kwara. According to him, some of Lagos result sheets were also taken to Nasarawa State.

“Also the result sheets of Lagos were found here. I have sent them back. Those of Lagos were also found in Nasarawa. You can see the reason why the elections were postponed,” the REC said.

Madami made the revelation while addressing party agents at the commencement of distribution of sensitive elections materials from the Ilorin office of the Central Bank of Nigeria ( CBN) to the sixteen local government areas.