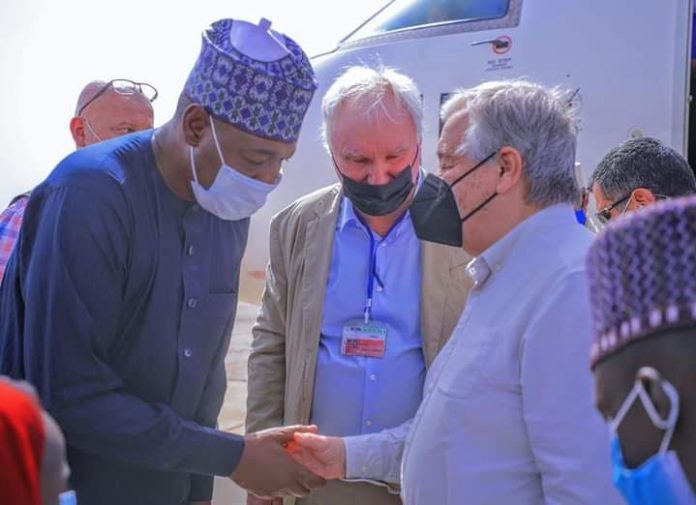 Borno State Governor, Babagana Umara Zulum, on Tuesday received the United Nations Secretary-General, Antonio Guterres, who was in Maiduguri to assess the humanitarian situation in the state.

Guterres arrived at the Maiduguri International Airport onboard a UN humanitarian aircraft at about 2:30 pm.

The Secretary-General was accorded a presidential welcome with cultural troops on display and he was presented a welcome gift by traditionally dressed boy and girl.

During the visit, the UN Secretary-General visited an IDP camp along Gubio road and also at UN-supported Bulumkutu Interim Care Center (ICC), which serves the purpose of Disarmament, Deradicalization, and Reintegration (DDR) centre for repentant insurgents, provides interim services to children and women in need of care and protection and others affected by conflict in the northeast.

Guterres interacted with humanitarian actors, internally displaced persons and government officials as part of his assessment.

He called on the international communities to sustain support to Borno State towards addressing humanitarian needs.

The UN Secretary-General spoke on the desire of IDPs to safely be resettled.

“What they (IDPs) really want is conditions to be able to go back home in dignity and safety. And that requires a high investment in trust, investment in livelihood, and investment in integration. I was thrilled to see that is happening. I understand that the dimensions of the problem require much resources. I appeal to the International community to support Borno State in addressing the humanitarian needs of the population.” UN Secretary-General said.

During a courtesy call at the council chamber of the Government House, Mr. Antonio Gueterres applauded Governor Zulum’s approach in the fight against terrorism in Borno.

“I have discovered that here in Borno, thanks to the Governor, you have understood and put in place the right approach to fight terrorism; of course, when we fight terrorists, we need to shoot at them; we need to have armies, but that would not solve the problem if we did not address the root cause. What I have seen here in Borno was a Governor determined to address those root causes”, UN Boss said.

Host Governor Zulum in his remarks highlighted some of the major causes of Boko Haram insurgency, listing extreme poverty, unemployment and desertification, among other things.

The Governor expressed gratitude to the UN Secretary-General, members of the international community, humanitarian actors and all stakeholders for their support to the people of Borno State.

“International humanitarian partners, civil society organizations and the Federal Government rapidly mobilized and supported Borno State Government by providing the needed aid necessary for people to survive and have shelters over their heads. Groups like UNHCR, IOM, FAO and UN shelters, among others, were there from the beginning and their support was truly life-saving. We wish to extend our sincere appreciation to all of them”, Zulum said.

The governor, however, identified, over the years, that the state has been spending hugely on supporting the security agencies and providing humanitarian support to the population.

Zulum said the state’s 25-year development and strategic plan was developed to address the root cause of insurgency.

Governor Zulum called on the United Nations to extend support to the state in areas of training youth volunteers fighting alongside the military and the Multi-National Joint Task Force (MNJTF) and the resuscitation of the Lake Chad Basin, which, hitherto, provided livelihood to millions of people living around the lake.

that security was improving and people have started picking the pieces of their lives.

He cited improvement of security, citizens have shown readiness to pick the pieces of their lives.