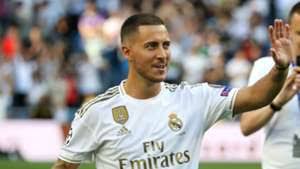 Newly signed Real Madrid forward Eden Hazard has stressed that he is not a “Galactico” yet – but hopes to help the club back to their glory days.

The Belgium international was officially unveiled as the latest arrival at Santiago Bernabeu today following a successful medical that sealed his move from Chelsea.

Exiting the Blues, with whom he has played for since 2012, for a reported initial fee of £88.5m (€100m/$112m) , the 28-year-old is believed to be the most expensive transfer ever conducted by the club, exceeding that of Gareth Bale .

Hazard has played down assumptions that he considers himself a member of the elite group of players who bear the moniker, such as Ballon d’Or holder Luka Modric, but professed a desire in his first press conference at the club to scale such heights.

“I’m not a “Galactico”, not yet, [though] I hope to be one day,” the Belgian stated. “I’m Eden Hazard and everything I’ve done is in the past [does not count].

“Here I start from scratch. I don’t consider myself a “Galactico”, but a very good player.

“I hope to start a new cycle with the players who have won so much, that’s what I’m here for.”

JUVENTUS REVEAL WHO WILL APPROVE POGBA’S RETURN FROM MANCHESTER UNITED