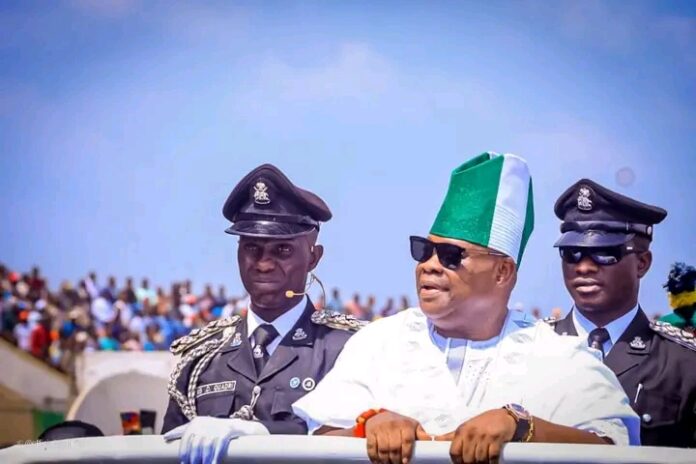 The Executive Governor of Osun State, Senator Ademola Adeleke has expressed optimism that the ongoing tribunal case will end in a favourable consideration and positive affirmation of the mandate freely given to him by the Osun electorate.

Notwithstanding the deceitful display of dramatization and sensationalism by the APC at the Tribunal, all facts on ground point to an imminent victory and reaffirmation of Adeleke’s mandate at the July 16th elections.

In a statement by the Governor’s spokesperson, Mallam Olawale Rasheed today in Osogbo, the State Governor explained that the subpoena on INEC to produce Adeleke’s 2018 filing with INEC has been discharged since INEC has produced the original file containing Senator Ademola Adeleke’s 2018 documents, which the Tribunal agreed was legible and clear enough for even a blind man to read it.

Adeleke’s Spokesperson stated further that his principal has been vindicated as no case of forgery has been proved against the Governor., submitting that gullible APC members celebrated non-existing victory over the recent Tribunal proceedings.

“It is beyond rhetorics as it is a settled position of law that a forgery allegation is criminal in nature and must be proved beyond reasonable doubt. All the authentic documents submitted by Governor Adeleke to INEC in 2018 and of course in 2022, are genuine, as the originating authorities have not denied ever issuing those certificates.

“How on earth will Oyetola and APC exhume a case of forgery against the Governor when he has been cleared up to the highest court of the land that he is qualified to contest and did not forge any documents?

Accept Responsibility for Looting of Assets

The Governor’s Spokesperson therefore called on Mr Oyetola and APC to be truthful to Osun people by disclosing the whereabouts of State assets taken away by their cronies and appointees.

Rather than wasting attention on baseless election petition, Osun people expect Mr Oyetola and his men to return state assets in their possession before the law will go after them.

He further called on Osun people to continue to support the administration of Governor Adeleke as he charts the course of fulfilling his electioneering promises, the fulfilment of which has started on a positive note the very moment he assumed office.

Makinde Kicks Off Testing Of 2,000 Oyo Residents For COVID-19

One Killed, Several Injured by Yansakai Vigilantes In Zamfara – Police