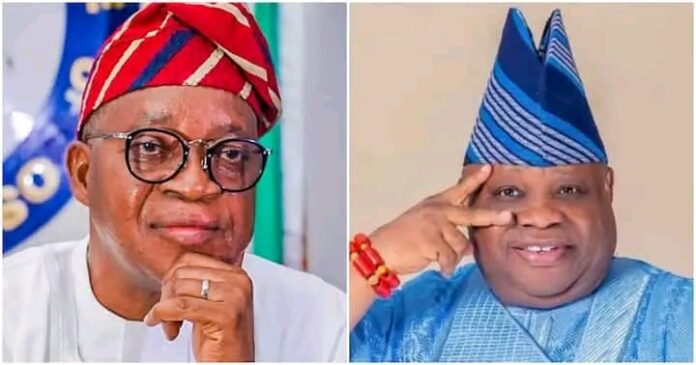 
The Osun State chapter of the All Progressives Congress (APC) has cautioned the state Governor Ademola Adeleke to stop disgracing the state by celebrating the submission of a mere questionable ordinary level certificate at the ongoing governorship election petition tribunal in Osogbo.

According to the State Acting Chairman of the APC, Sooko Taju Lawal, in a rejoinder issued by the party’s Director of Media in the state, Chief Kola Olabisi, it was shameful that a governor could be celebrating the submission of a controversial secondary school document at early sixties.

Lawal stated that it was a shame that it took the state Governor Adeleke and the Peoples Democratic Party (PDP) to hire the services of no fewer than six Senior Advocates of Nigeria (SAN) to prevent the controversial certificate from being presented which was bungled by the eagle-eyed tribunal panelists who frowned at such infraction with impunity from a so-called state executive.

He wondered why there should be a delay in the production of a mere certificate if there was nothing to hide by the embattled state Governor Adeleke.

The state governor should consider himself as a beneficiary of parts of the ills of democracy as his type has no business to be at the apex of authority in any organization to talk less of a whole state where there is no household that cannot boast of, at least, two verifiable qualified graduates.

According to the Osun APC, “why did it take the Independent National Electoral Commission (INEC) about three adjournments before the dancing governor could provide his Oluwole-made result?

“In all honesty, coud Adeleke employ someone who parades his type of invalid result at any of their family businesses?

“Has Adeleke forgotten that the said demanded results were presented after much threats and public opprobrium?