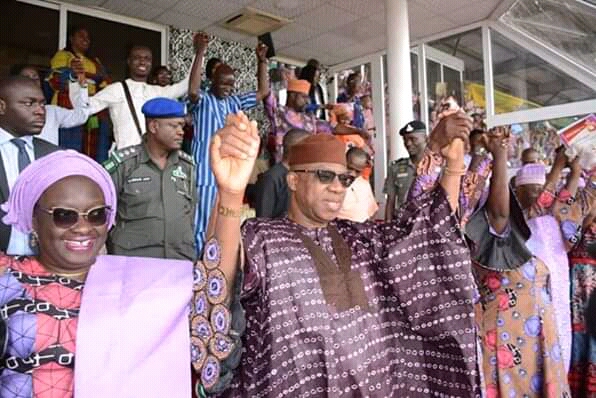 The Ogun State Governor, Prince Dapo Abiodun has disclosed that his administration would collaborate with relevant financial institutions in the country that are capable of providing credit support to cooperative societies and other micro small and medium scale enterprises in the state.

Prince Abiodun stated this at the celebration of the 2019 International Day of Cooperatives Celebration, held at the MKO Abiola International Stadium, Kuto, Abeokuta, with the theme, ” Coops for Decent Work”, said that his administration would provide an atmosphere that provides adequate motivation for cooperative societies to excel.

“Our administration will collaborate and partner with relevant stakeholders and financial institutions like the Bank of Industry who are capable of providing credit support to cooperative societies and other micro small and medium enterprises in the state,” he said.

“Let me assure you that our administration will continue to support the cooperative societies in Ogun State to become successful business enterprises which will be protected by enacted laws and in tandem with best global practices,” he said.

The helmsman noted that the welfare of workers in the state remained unshakeable, adding that regular payment of salaries, remitting of cooperative deductions to pension fund administrators and other entitlements would occupy the front burner of his administration,adding that the era of delay in payment of salaries and non- remittance of deductions had come to an end.

Abiodun who also disclosed that meaningful development could only be achieved with collective efforts between the society and the government, added that his administration would ensure an atmosphere that provides adequate motivation for promoting unity irrespective of place, circumstance or birth.

In her welcome address, the permanent secretary,Ministry of Community Development and Cooperatives, Mrs. Melutia Ogunremi noted that the ministry would soon embark on a raid ofunregistered cooperative societies operating in the state, adding that the task force would clamp down on all illegal cooperatives societies defrauding the people of the state.

“A taskforce is being put in place to move around the nook and crannies of the state to clampdown on illegal cooperatives and those using unregistered cooperatives to defraud the good people of the state, the program is tagged operation flush them out and has its slogan as ” If it is not registered by Ogun State government, it cannot operate in Ogun State,” she said.

Earlier in his remarks, President of the Ogun State Cooperative Federation Limited (OGSCOFED), Alhaji Abdulrazaaq Ola Balogun urged the Ogun State government to help the cooperative limited achieve its long awaited dream of having a Monotechnic of cooperative, through the upgrading of the status of the states owned cooperative college in Abeokuta, pledging their unalloyed support for the administration of the Prince Dapo Abiodun led government.