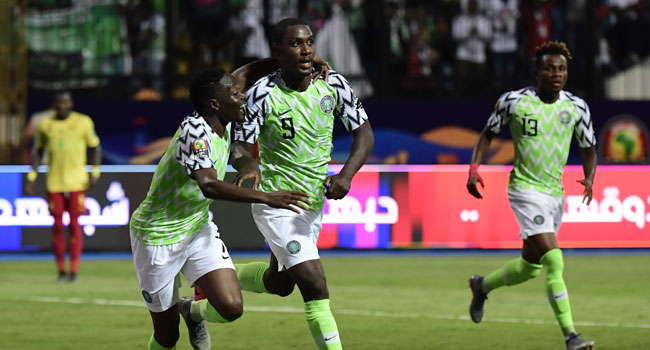 Nigeria drew level as Ighalo volleyed in his second just past the hour and he then turned provider to play in Iwobi to steer home three minutes later and set up the prospect of a highly anticipated quarter-final clash with hosts and favourites Egypt.

Seedorf’s penchant for change has seen the former Dutch star heavily rotate his Cameroon side in Egypt, with Karl Toko Ekambi dropping to the bench here and 2017 player of the tournament Christian Bassogog recalled along with Clinton Njie in a bid to breathe life into a faltering attack.

Nigeria boss Gernot Rohr paid the price for resting key players in the shock 2-0 loss to Madagascar, with Wilfred Ndidi, Kenneth Omeruo, and Alex Iwobi all returning to the starting line-up.

The Super Eagles eliminated Cameroon in the first knockout round the last time they were reigning champions in 2004, and their bid to repeat history looked on when Ighalo nudged Nigeria ahead with a scrappy opening goal after 19 minutes.

Moments after Michael Ngadeu-Ngadjui powered a header over at the other end, Peter Etebo hooked a deep cross to the far post where it was driven back across goal by Omeruo and Ighalo stabbed home via a huge deflection that wrong-footed goalkeeper Andre Onana.

It was the first time Cameroon had conceded in Egypt, but after scoring just twice in three group games the Indomitable Lions matched that output in three frenzied minutes before half-time.

Bahoken pulled Cameroon level on 41 minutes when he ghosted in behind Omeruo to connect with a terrific whipped cross from Bassogog, and Njie soon fired them in front after outpacing Ola Aina to a flick-on, holding his nerve and balance to slip beyond Daniel Akpeyi.

Njie nearly got the better of Akpeyi early in the second half, Nigeria ‘keeper superbly clawing the ball out from just inside his post after the Marseille winger’s cutback was deflected towards goal.

Rohr introduced Samuel Chukwueze with an hour gone but it was Ighalo, the top scorer in qualifying, who came to the rescue once more with a thumping finish after Ahmed Musa chested a cross into his path.

Ighalo joined Senegal star Sadio Mane on a tournament-leading three goals and he played a key role in Iwobi’s decisive strike on 66 minutes, threading the ball through to the Arsenal winger to side-foot past Onana.

Ngadeu-Ngadjui toed wide at a corner but Cameroon struggled to threaten Nigeria in the closing stages with Ighalo denied a hat-trick late on as Onana plunged low to his right to knock away the forward’s header.