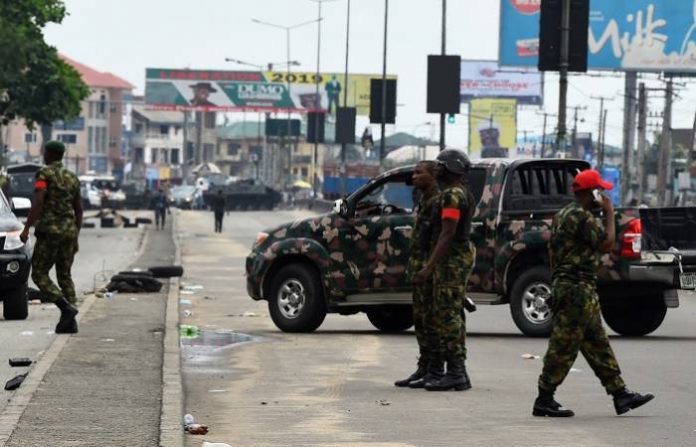 The European Union (EU) Election Observation Mission Nigeria 2019, the International Republican Institute (IRI), the National Democratic Institute (NDI) and other foreign election monitors, said yesterday in Abuja that the presidential and National Assembly elections and the governorship and state Houses of Assembly elections were hugely marred by the involvement of military personnel, contending that it did not conform with international best practice.

The Coalition of United Political Parties (CUPP) were also up in arms against the military yesterday, singling out the Chief of Army Staff, Lt. Gen. Tukur Buratai, for mention as nursing a secret agenda to return the country to a military rule.

The view expressed by the foreign observers were also echoed in Abuja yesterday by the outgoing Archbishop of the Abuja Catholic Archdiocese, His Eminence, Cardinal John Onaiyekan, who said the flawed elections witnessed during 2019 polls may have negative impact on good governance in the country.

The position of the international election observers was unanimously expressed in a preliminary report signed by the EU Election Observation Mission Nigeria 2019, IRI, NDI, the Centre for Democracy and Development (CDD) and the Integrity Friends for Truth and Peace Initiative (TIFPI), and presented yesterday in Abuja.

Also in its second preliminary statement, the EU observed that there were “inconsistent numbers, lack of clear checks and explanations, and insufficient public information over the conduct of the presidential and National Assembly election, which the group said undermined the integrity of the election and not in line with international standards for access to information and public accountability.”

The EU noted for the presidential and National Assembly elections: “Polling for the federal election was cancelled in a larger number of polling units across the country; covering nearly 2.8 million registered voters. This was fourth times more than in 2015. While this number did not affect the outcome given the margin of win, this was not a good process.

“INEC did not provide sufficient information on these cancelations, the specific reasons for them, and the precise local government areas affected. This undermines public confidence in the process.”

In the NDI/IRI preliminary statement on the governorship and state Houses of Assembly elections, the report presented by the Senior Associate and Regional Director for Central and West Africa (NDI), Dr. Christopher Fomunyoh, and the Regional Director for Africa IRI, Mr. John Tomaszewski, noted that while there were improvements in the administration of the state-level elections, it was yet marred by irregularities.

According to the report, ‘’There were instances of intimidation, vote-buying and violent acts during the voting, counting, and collation processes in some places. Incidents of violence and disruption to the balloting process were observed in Lagos, Benue, Rivers and Nasarawa States.

‘’The delegation was informed of the loss of life as a result of election-day violence. The mission deplores these losses and expresses its deepest condolences to the bereaved and to the Nigerian people.

‘’These actions and the impunity with which some electoral actors conducted themselves, including some polling agents and members of the military, undermine citizen confidence in elections and threaten the legitimacy of Nigeria’s democracy.”

The report added that despite being Africa’s largest democracy, Nigeria has the lowest representation of women in national legislative office of any country on the continent, saying this representation will likely fall below five per cent following the February 23 National Assembly vote.

According to the groups, “This is not a record to be proud of; many Nigerians expressed deep concerns about the militarisation of the election process.”

Also, in their analysis of the Saturday election, the EU Chief Observer, Maria Arena, and the Deputy Chief Observer, Hannah Roberts, who addressed the media at Transcorp Hilton Hotel, Abuja yesterday, expressed dissatisfaction with systemic failings and electoral security problems, which they said show the need for serious reform ahead of future elections.

Like the position of NDI/IRI, the EU noted that there were operational improvements in the governmental and state House of Assembly elections of March 9, it, however, stated that these gains were overshadowed by systematic failings, including a lack of transparency, incumbency advantage and a troubling electoral security environment.

According to the report, “Observers, including EU observers, were denied access to collation centres in Rivers. There was misuse of incumbency, including on state-owned media, which prevented a level playing field. In the two weeks leading up to the state elections, EU observers saw some misuse of state offices as well as institutional websites being used for campaigning by both APC and PDP incumbent governors.”

Arena noted that the systematic problems evident in the 2019 electoral process show the news for an inclusive national discussion on reform for greater electoral integrity and participation.

Though the body, which deployed 73 observers to the polling points and collation centres across the 22 states commended significant improvement in the accreditation process, it called for improved data management and more information and explanation from INEC on this important phase of the electoral process.

Similarly, while observing that the 2019 general election recorded unprecedented improvement in the aspect of logistic, the TIFPI, observed the March 9, elections in 26 states including the FCT local council election, expressed concerns over cases of alleged security interference in the elections in states such as Kogi, Zamfara, Akwa Ibom, Rivers, Lagos, Kaduna, Kano and Imo, where some politicians deployed their personal security attaches to disrupt elections on various fronts.

The Executive Director/Lead Observer, TIFPI, Livingstone Wechie, said: “TIFPI observed the alleged involvement of men in Army and other security uniforms in the elections in Imo, Rivers, Zamfara, Kaduna, Akwa Ibom, Edo and Ogun. The Army high command had earlier assured that the military will provide security and not interfere in the process.

“TIFPI observed the wave of men in Army and other security uniforms who sought to disrupt and indeed disrupted the election process in some states and we opine that there must have been also the use of fake soldiers and infiltration of some of the security formations.

‘’Hence the Army authorities should fish out any of its men that may have interfered in the election in any of these states including possible infiltration in their circles.”

Expressing optimism that the 6th Division of the Nigerian Army has assured of investigation of CCTV footage of an alleged Army invasion of a home in Rivers, stating that the gesture is commendable, and urged that an audio tape where the APC candidate in Akwa-Ibom State allegedly negotiated with army to take down opposition should be investigated.

In another assessment by the Centre for Democracy and Development (CDD), the threats, harassment, intimidation and assault of election officials, observers, journalists and voters during Saturday’s governorship and state assembly elections were condemned.

The CDD, in its report signed by the Chairman, CDD-EAC, Prof. Adele Jinadu, and CDD Director Ms. Idayat Hassan, the group expressed worries over the wave of violence that characterised the elections.

It said: “The weaponisation of the election and abductions of INEC staff and the ad-hoc staff are worrisome and constitute a drawback to the progress we have made so far. INEC officials were kidnapped and later released in Benue, Katsina, Kogi, Imo, Akwa Ibom and Rivers during voting and collation of results, with Katsina alone recording 20 cases of abductions.

“We reckon that these attempts are aimed at undermining the system usually to favour the perpetrators. Our monitors on the ground did not only report cases of intimidation but were victims, too.”

Meanwhile, the Nigerian Army has warned the United Kingdom against interfering in Nigeria’s elections following comments by the UK condemning the role of the military in the Rivers State elections.

The British High Commission in Nigeria had in a series of tweets on Sunday expressed concerns over the report of military interference in the election in the state.

It said the military’s interference in the polls put stress on the staff of INEC and has made it difficult for them to carry out their duties.

However, the army said in a statement yesterday by its acting Director of Public Relations, Col. Sagir Musa, that the allegations were baseless.

It said: “Foreign interests are enjoined to be mindful of interfering in our national internal affairs especially when there is no credible evidence. Any allegation against the NA must be confirmed from appropriate quarters before jumping to conclusions.

“The NA, as a responsible organisation, wishes to debunk such misrepresentation in order to set the record straight. Similarly, it is on record that the NA has been globally applauded by many individuals, foreign and local elections observers for its sacrifices/roles in creating an enabling environment for a secure, transparent and peaceful conduct of the elections.”

The army maintained that politicians gave hoodlums military uniforms which confused members of the public.

It said it would continue to remain neutral during and after the polls, adding that it was only providing assistance to civilian security agencies.

Musa insisted that UK’s accusation was “totally baseless, untrue and therefore capable of misleading unsuspected members of the public’’.

He maintained that there was no credible record of the army’s involvement in election anywhere in the country before, during and after the exercise.

Musa noted that available records showed that the army has been globally applauded by foreign and local elections’ observers for its role in ensuring peaceful conduct of the elections.

“Foreign interests are, therefore, enjoined to be mindful of interfering in our national internal affairs, especially when there is no credible evidence,’’ he said.

According to the army spokesman, any allegation against the army must be confirmed from appropriate quarters before jumping to conclusions.

Musa, however, re-assured Nigerians that the army would deal with any of its personnel found to have contravened the law.

In a related development, the CUPP yesterday accused the Chief of Army Staff, Lt. Gen. Tukur Buratai, of nursing a secret agenda to return the country to a military rule.

The opposition parties described the performance of the Nigerian military in the just concluded governorship election in some parts of the country as a ‘’treasonable felony.’’

In a statement issued by its national spokesperson, Mr. Ikenga Ugochinyere, the coalition said Buratai’s alleged use of armed soldiers to attack officials of the INEC and upturn electoral process were testing grounds for his plot to truncate Nigeria’s democracy.

CUPP warned that an electoral war in the magnitude of that of 1983 is looming in states like Rivers, accusing the army chief and the APC of desperate moves to announce fake governorship election results in Army Barracks in favour of an unknown and non-existence party called AAC.

It said: “We condemn in unequivocal terms President Muhammadu Buhari and his Chief of Army Staff’s attempt to overthrow the electoral process in Rivers State with APC thugs and security agents.