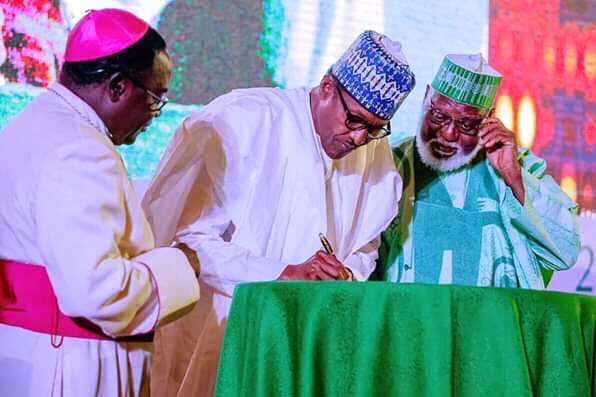 Top presidential candidates on Wednesday signed a peace accord pledging to ensure a violence-free election.

A previous accord had been signed by the presidential candidates.

The chairman of the national peace committee, former Head of State, Abdulsalami Abubakar, said the committee decided to organise the peace accord signing in order to ensure peaceful conduct of all elections in the country.

Nigerians go to the poll this Saturday to elect a president and members of the National Assembly. The elections of governors and members of state Houses of Assembly will hold on March 2, 2019.

Mr Abdulsalami in his welcome remarks said elections will not hold in the absence of peaceful atmosphere.

He said even governance after the election will not be possible without a peaceful environment.

“Don’t do anything to make a bad situation worse,” he said.

“Without cooperation among political parties, we are going nowhere,” he said.

Mr Abdulsalami reminded the presidential candidates that by signing the peace accord, they are committing themselves to ensuring a peaceful election in Nigeria.

He, however, said the mere signing of the peace accord will not achieve the required objective “unless all other actors are forced to work with the same rules.”

The former head of state lamented the spread of misinformation in the nation’s mosques and churches and said: “this must be contained.”

Also, former head of state, Yakubu Gowon, who spoke briefly urged the candidates to tell their supporters to ensure peaceful conduct during the elections so that in the future, there may be no need for foreign observers because the right conduct would have been assured.

“May the winner be as dictated from above,” he said.

In her remarks, the Secretary-General of the Commonwealth, Patricia Scotland, said millions of people across the world are praying for Nigeria and its people hoping that the forthcoming election will hold peacefully.

She said Saturday’s election will be the sixth since 1999 when the country returned to democracy after military rule.

She expressed the hope that the poll will entrench and build on the gains achieved since 1999.

Ms Scotland said for those born after 1999, this year’s election will be the first time to exercise their right and determine who rules Nigeria.

She said all concerned should not fail them by ensuring a credible and transparent election.

She said the world is holding their breath because Nigeria is the largest economy in Africa with the largest population.

“It is a burden that Nigerian leaders gathered here today carry.

“We call on their party, supporters and public to follow their lead.

“Elections will come and go, but this great Nigeria will remain,” Ms Scotland said.

The event is also being attended by several top traditional rulers and other notable citizens from Nigerian and outside.