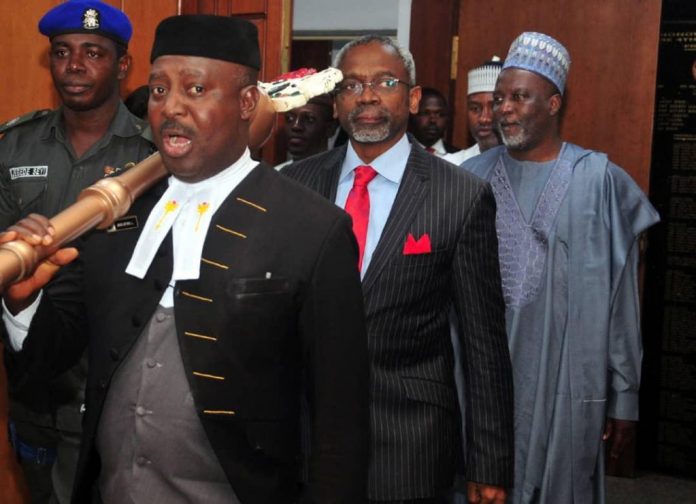 The Federal High Court in Abuja has dismissed a suit challenging Femi Gbajabiamila’s eligibility to contest the speakership of the 9th House of Representatives.

Court records seen by our correspondent on Tuesday revealed that Justice Inyang Ekwo dismissed the suit following the decision of the plaintiff, Philip Undie, to discontinue the case.

Undie filed the legal action on May 21, 2019, asking the court to remove Gbajabiamila as a member of the House of Representatives and disqualify him from contesting the speakership election.

He had based the suit on the alleged conviction of the lawmaker of fraud and dishonesty by the Supreme Court of the State of Georgia in the United States in 2007.

But a new lawyer engaged by the plaintiff, Mr S.D. Okoro, appeared in court on Monday to adopt a notice of discontinuance of the suit earlier filed.

Lawyer for Gbajabiamila, Mr Femi Adedeji, of the law firm of Mr Femi Falana (SAN), said he had no objection to the application for the discontinuance of the case.

But Adedeji prayed that his client, having taken issue with the plaintiff by filing a counter-affidavit against the originating summons and a preliminary objection, the suit should not be struck out, but should be dismissed so that it would not be refiled in the future.

He also prayed for a cost of N1m to be awarded against the plaintiff.

Ruling, Justice Ekwo dismissed the suit as prayed by Gbajabiamila’s lawyer, but refused to award cost against the plaintiff.

The judge said, “On the last day of hearing of this case, Mr Okoro appeared for the plaintiff but there were no processes before the court showing that there was a change of counsel.

“Therefore, I am satisfied that Mr Okoro has authority to represent the plaintiff in this case and therefore entitled to conduct the case in accordance with the law.”

The judge added, “On the issue of cost, I will not make any order as to cost since the parties decided to end the matter peacefully.

“I allow them to go home without grudges against each other.”

In the suit, the plaintiff had alleged that Gbajabiamila, as a practising lawyer in the State of Georgia, “was convicted and sentenced for fraud and dishonesty in relation to the sum of $25,000” belonging to his client.

He said as punishment for the offence, Gbajabiamila was suspended from practising law for 36 months.

He said the conviction and sentence were passed by the full panel of the Supreme Court of the State of Georgia in February 26, 2007.

The plaintiff, through his former lawyer, Mr Ayodele Justice, had contended that by virtue of Section 66 of the Nigerian Constitution, the judgment of the Supreme Court of the State of Georgia allegedly convicting and sentencing Gbajabiamila for fraud and dishonesty, had made the lawmaker unfit to be elected as a member or Speaker of the House of Representatives.

Those joined as defendants in the suit marked, FHC/ABJ/CS/539/2019, are Gbajabiamila, the House of Representatives, the Attorney General of the Federation and the APC.

Mob Accuses Man Of Turning Children Into Tubers Of Yam In...