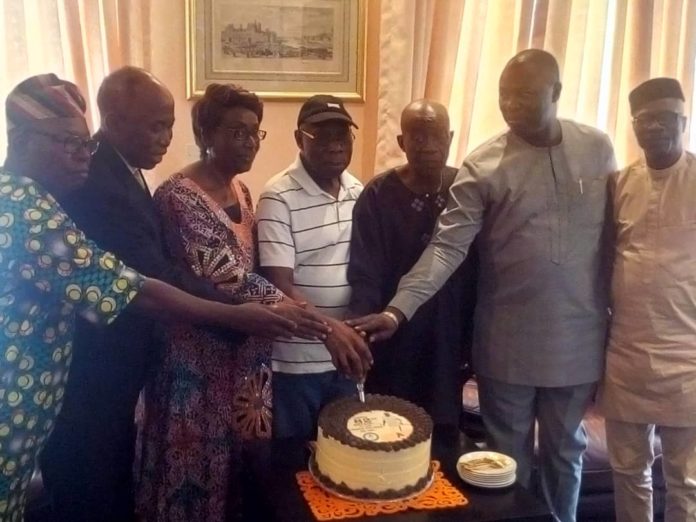 It was a double celebration for Nigeria Squash Federation (NSF) family on Friday, as the game formally got the approval of the National Council on Sports (NCS) to be a compulsory sport at the biannual National Sports Festival (NSF).

In a release by Obasanjo’s Media Aide, Kehinde Akinyemi, Oyerinde said that the approval by the NCS to have Squash on the list of compulsory games for the Sports Festival and coming to celebrate the former President (today) was a double celebration of sorts to the Squash family in Nigeria.

According to the NSF boss, “I have a good news, which I just received on my way here. The game of Squash has been approved by the National Council on the list if compulsory Sports and I will be breaking it here first.”

Shedding more light on the outcome of the Extra-Ordinary meeting of the National Council on Sports, Oyerinde said that Council reached the following decisions;

“A maximum of 32 sports shall feature at the Festival (27 compulsory and 5 optional) This is in line with practices obtainable in the organization of major International Games i.e. Olympic Games, Commonwealth Games, Continental Games etc. It is to reduce the burden of hosting, organizing and participating in the festival.

The compulsory sports were selected based on;

-Popularity of the sport in the 36 states and FCT

-State entries in the sport in previous Festivals

-Standard of Nigeria’s participation in the sport at the International level.”

He stated further that in alphabetical order, 27 compulsory sports, including Squash on number 20 have been approved, while only five out of 24 other sports got the nod as optional for the country’s National Sports Festival.

“To me, this is a double celebration for the Squash family in Nigeria, as we are equally celebrating our grand Patron today. If you say it is a coincidence, yes, because, having observed the birthday on March 5, God has destined it such that today that we choose to celebrate him, is the same day that we are getting the good news for this great sport,” Oyerinde disclosed.

He described Obasanjo as “a great Nigerian, who has been a pillar of the game of Squash in Nigeria. If you have observed quite well, there is always a Squash court around him. This is the passion he has shown to this sport. Our prayer is that all your efforts to make the sport grow higher and higher will manifest in your life,” the NSF President.

The Chairman/President Governing Council of the BELLS University of Technology, Rev. Dr. Wilson Badejo who was on a similar birthday visit to Obasanjo, said the game of squash has been “one of the secrets of Baba Obasanjo’s agility and good health.”

The former General-Overseer of the Foursquare Gospel Church admonished the former President for his support and passion for the game, even as he prayed for him, his family and the Squash Federation.

A retired Judge of the Court of Appeal, Justice Deinde Soremi, who is also a Squash player eulogized Obasanjo for his tremendous interest and concern for the game.

The Ogun State Chairman of Squash Association, Dipo Akingbade thanked Obasanjo for creating time to be around for the celebration.

Obasanjo in his reaction disclosed that his passion for the game started during his military training in India. “I saw it as a fascinating and challenging game. It is a very fast game and it was from there I picked interest in it.

“When I built my first house there was a Squash court. In my farm house also, we created space for a squash court. At the Hilltop residence, there is also a court. When we were building this place, I had to appeal for a Squash court to be located within the premises as one could not be attached to the library.

“I want to thank the Federation and Ogun State body for supporting and popularising the game. And they should be commended also for drawing sponsors for competitions.”

OGUN: ABIODUN CALLS FOR DISMISSAL OF AKINLADE’S PETITION AT THE TRIBUNAL

AMOSUN LEADS OVER 3,000 LOYALISTS TO PDP IN OGUN