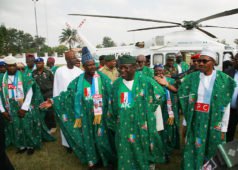 
President Muhammdu Buhari and Vice President Yemi Osinbajo on Tuesday arrived in Akure, the Ondo State capital, amidst heavy security on a campaign visit to Ondo and Ekiti states for the 2019 general elections.

The News Agency of Nigeria reports that Buhari and Vice President started their campaign from Ekiti to seek re-election to their offices as candidates of the All Progressives Congress (APC).

Rotimi Amaechi, the Minister of Transport, Chief Bola Tinubu, the Head of the Presidential Campaign and Adams Oshiomhole, the party’s National Chairman, also arrived after the president and vice president

NAN also reports that the men of the Nigerian Police were led by Mr Gbenga Adeyanju, Commissioner of Police in the state. 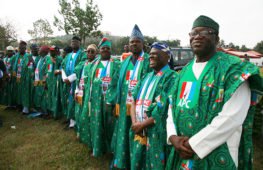