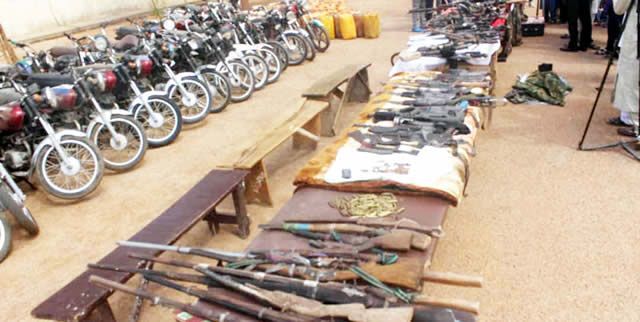 In a statement by Yusuf Idris, Director-General, Press Affairs to Gov. Bello Matawalle on Sunday said the governor made the revelation when he received former Head of State, Gen. Yakubu Gowon at the Government House, Gusau on Saturday.

The statement said that most of the weapons were voluntarily returned to the government by repentant bandits who surrendered to embrace peace while denouncing their bad ways.

The governor described the elder statesman’s visit to the state as timely and sought for advice from the retired general on the best ways to end banditry in the state.

“Matawalle maintained that Nigeria now needs more of his personality with the current situation of banditry, kidnapping and other heinous crimes in order to advise current leaders in handling the terrible situation.

“He further said that tapping from the wealth of Gowon’s experience as a former Army General and Head of State who fought for the corporate existence of the country will assist his administration positively on security intelligence and intervention.

“On his government efforts to end the menace of armed banditry, the Governor informed the leader that his administration has adopted various methods that include reconciliation which have started to yield positive results as over 216 AK47 rifles have been surrendered to the authorities by surrendering bandits,” the statement added.

In his response, Gowon said he was in the state for his Nigeria Pray initiative, to pray for an end to the violence in the Northwest and seek for God’s blessings and wisdom for leaders to offer good governance as well as sustainable unity in the country.