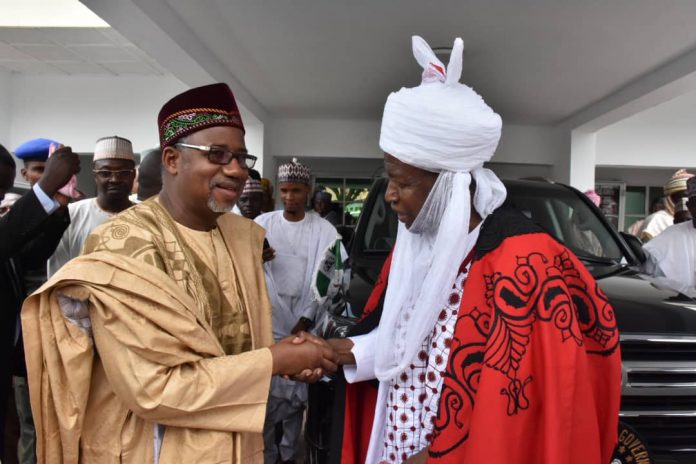 Bauchi State Governor, Senator Bala Muhammad Abdulkadir has expressed dissatisfaction with the involvement of traditional institutions during the last general elections in the state, cautioning them against political interference in order to maintain their image and dignity as fathers to all just as he rejected the idea of State Police.

The Governor who received the Emirs of Ningi, Mohammed Inusa Danyaya and that of Misau, Ahmed Suleiman who paid him the traditional Sallah homage at the Government House on Thursday also said that his administration would not accept the idea of constituting State Police due to its ethnopolitical implications.

The Governor who was responding to the request of the Emir of Ningi, Mohammed Inusa Danyaya who pleaded with the him not to accept the idea of State Police in Bauchi state because according to him, it will increase criminal activities in the state assured that his administration will do everything possible to protect the lives and property of the citizens.

Bala Muhammad instead of the State Police announced the resolve of his administration to set up a Security Trust Funds which will empower traditional leaders to address insecurity in their respective domains because according to him they are the custodians of the people around them.

The Governor also pledged to use the traditional institutions in the state as part of efforts to ensure the maintenance of peace, security and peaceful coexistence in the state.

To the people of Misau Emirate, the Governor assured them that in addition to the award of road rehabilitation, the present administration would improve the health and education sectors in the area.

In their separate speeches, the Emirs of Misau and Ningi Emirate Councils, Alhaji Ahmed Sulaiman and Alhaji Yunusa Muhammad Danyaya who led their delegations reaffirmed their loyalty and support to the administration of Governor Bala Abdulkadir Muhammad.

The Emir of Misau, Alhaji Ahmed Sulaiman used the medium to request the Governor of the need to extend road rehabilitation from Misau to Damban to alleviate the sufferings of the affected communities.

On his part, the Emir of Ningi Alhaji Yunusa Muhammad Danyaya appealed to the Governor to consider the Emirate in the award of developmental projects, especially township roads and opportunities for political appointments.