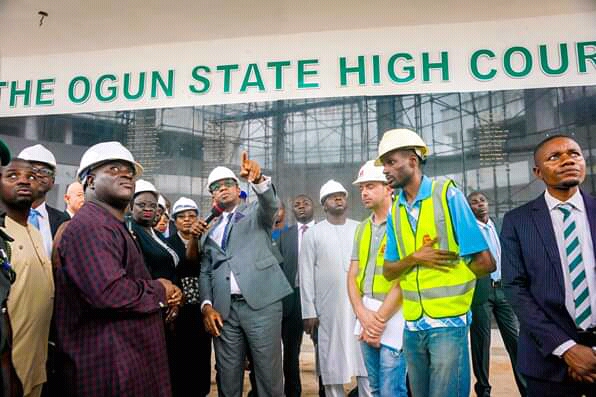 The Ogun State Governor, Prince Dapo Abiodun, was surprised at the quality and pace of the paid for State Judiciary Complex on Kobape Road, Abeokuta when he visited the site on Tuesday.

He immediately summoned the contractors, Menterota Limited to see him immediately to justify why they delayed in delivering the complex wholly and “why you are asking for variation after being fully paid”

Gov Abiodun expressed displeasure at the level of work done, describing the quality and design as “flawed”.

The Governor asked rhetorically as he was conveyed round the uncompleted premises, “but this job was fully paid for by the previous paid administration?”

He said he could not understand why a project that was supposedly paid for 100 percent, was yet to be completed and delivered.

Prince Abiodun was accompanied on the project inspection by the State Chief Judge, Justice Mosunmola Dipeolu, the Secretary to the State Government, Mr Tokunbo Talabi and other state officials.

The Governor who said he was prompted to visit the complex as the state judiciary was set to host a National Judicial Conference at the venue in September.

According to a statement by the Governor, it would take a lot of efforts for the place to be ready for use.

On his assessment of the project, the governor said the design had some flaws and the quality of finishing done was not impressive, adding that he would seat down with the contractors handling the project and look at some of the flaws noticed.

“In my opinion, I think that the design itself has some flaws, not so sure about the quality of finishing I am seeing, but again, I feel that once we sit down with the contractors, both the civil and the contractors handling the fixtures, we should be able to work something out, there might be some design changes around here.

” As you can see, there are some pipes exposed , they look like designs from the sixties, you can also see rain water gathering on the floor, the receptionist cannot seat down there when it is raining even in the sun, we need to do some design changes,” he said.

Abiodun said the objective of his visit was to ensure that the complex was fully ready when the Judiciary resumes and begin to prepare for their conference in September.

The State Chief Judge lauded the governor for having at heart the comfort of the judiciary, saying that the gesture of the governor to see to the timely completion of the complex in readiness for a conference coming up in September, would be repaid with the cooperation of the state judiciary.