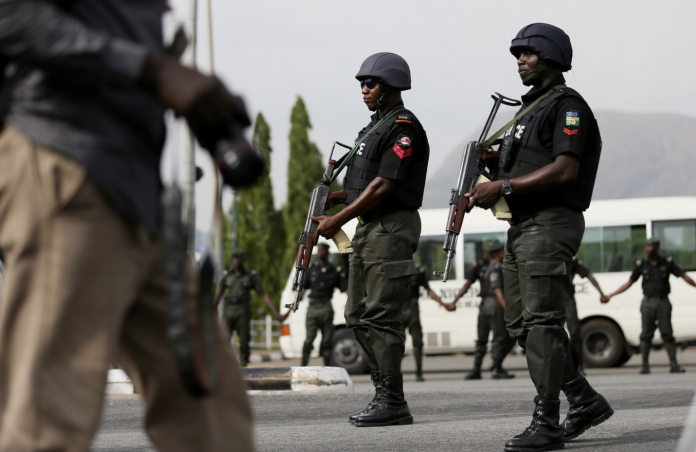 A protest by Abba youths on Wednesday, however, turned violent, with the protesters scampering to safety following a confrontation with police officers, who released canisters of teargas in the air to disperse the protesters.

It was gathered that that 12 persons, including three women, were arrested during the protest, and were yet to be released as at the time of filing this report.

Abba community had planned the peaceful demonstration along the Onitsha- Awka expressway to protest alleged takeover of their land by Ukpo community. The Supreme Court had delivered a ruling on the land dispute in January, this year, asking the two communities to return to the High Court to begin the case afresh, following alleged missing of court documents relating to previous ruling on the matter.

The clash between the protesters, however, started when stern-looking policemen blocked the Enugu-Onitsha expressway in a bid to stop the protesters from carrying out their protest.

Their insistence on holding the protest caused the angry police personnel to release canisters of teargas on them, which also forced students of a Community Secondary School in Abba to flee from their classrooms.

Vehicular movement was hindered for several hours in the area, forcing motorists to use alternative roads to their various destinations.

Speaking on behalf of the protesters, a community leader, Mr. Obinna Chukwuma regretted the development, adding that their decision to embark on a peaceful demonstration was to let the world know what they were passing through over their land.

He said: “Abba is a peace-loving community, but Abba is under siege. We have been living in harmony with our neighbours, but all of a sudden, a money bag from our neighbouring community, Ukpo, decided to take over our land by force.”

He called on Governor Willie Obiano to intervene in the matter in the interest of peace and harmony, saying, if Ukpo people could wait for 44 years for the case in court, they could as well allow the court to decide on it finally.

He also called on the boundary commission and the surveyor general of the state to demarcate the appropriate boundaries for the two communities, to avoid a situation where the people would be tempted to embark on self-execution.

No representative of Ukpo community was on ground to react to allegation of encroachment by Abba community. The Spokesperson, Anambra State Police Command, SP Haruna Mohammed could not also react to allegations that police disrupted their protest as calls to his mobile lines proved unreachable

COVID – 19 SHOULD NOT BE TRIVIALISED, NYSC DG