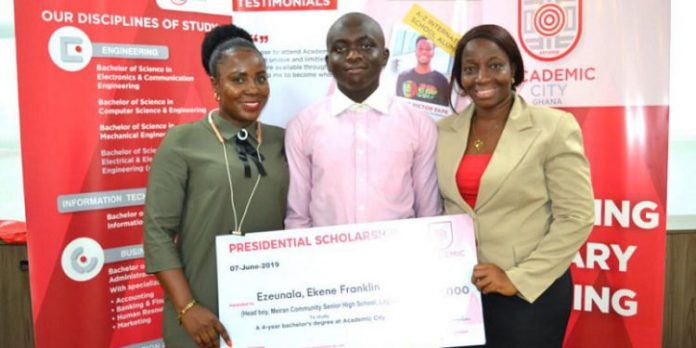 The presentation was witnessed by his mother, Mrs Chinelo Ezeunala; a team from his school (Meiran Community Senior High School), led by the Vice Principal, Mrs Toyin Ogunleye and Prof Adewale Solarin, who runs the non-profit organisation, International Academy for the Gifted, which recommended him for the scholarship.

Speaking during the presentation at the university’s Lagos office in Isolo, Senior Admissions Manager (Nigeria) Mrs Ogechi Ekpe said Ekene was not given the scholarship just because he scored 347 in the UTME – the highest in the country – but because he had been recommended by Prof Solarin and competitions that identify and rank gifted children in Africa.

“We have here today Ekene who scored the highest mark in the UTME from Meiran Community Senior High School. We also have the key person from the International Academy for the Gifted, who followed through and made sure that he got this particular scholarship.

“I want you to understand that this is a very rare privilege. You stood out among the best in Nigeria, and Academic City, with a lot of counsel and a lot of selection, has deemed it fit to offer you what we call a Presidential Scholarship,” she said.

Solarin, a Professor of Algebra at the National Mathematical Centre, Abuja, said Ekene was recommended for the scholarship because he had been ranked as gifted.

“I have slides here to show what students of his ranking achieve. When a student participates in this competition, we are able to compare him with other students from 120 countries of the world. We have an agreement with Academic City to recommend the best three from the Academy for scholarship. We checked our records and we have been looking at him. He is here not just because of JAMB but for his track record. Over the years, he has established himself,” Solarin said.

Senior Admissions Officer Ms Sandra Plangtok said the $40,000 would cover Ekene’s tuition, feeding and transportation as well as $300 monthly stipends when the school is in session.

“The Presidential Scholarship covers tuition, hostel, feeding, books, laptop, air ticket from here to Ghana and back, insurance and a monthly stipend of $300 when school is in session,” she said.

Ms Plangtok added that Ekene would benefit from the institution’s small class size, well equipped facilities, practice of yearly internships, action-based learning that allows students to practise what they learn and entrepreneurship training.

Ekene’s mother thanked Academic City for the award and Prof Solarin for the recommendation.

“I am so overwhelmed with joy. My thanks go to Prof Solarin. Thanks for this wonderful recommendation. To Academic City, you have been wonderful. To the teachers, thanks for pushing him,” she said.

Mrs Ezeunala, a Chemistry teacher at Bigtree College, Ghana, expressed disappointment about the lack of recognition of her son’s feat from her home state government, Imo State, and the fake news making rounds that she had received huge sums from government and various groups.

She said: “I am using this medium to let Nigerians know that there is need to encourage young brains. The governor of our state has not called. If this achievement was in the entertainment industry, I know what would have happened by now.

“All we see on the internet are fake news. They said the government had come to see us and we were relocated to Ajah; which is not true.

“A group, Hijab Society, presented him an envelope and when I checked, it was N2,000 that was in it. Yet, they posted online that they gave him a cash prize. People have been calling me, thinking I received a lot of money; which is not true.”

Mrs Ogunleye also thanked the school for the scholarship.

She described Ekene as a good boy.

“Franklin has been a good boy. He is quiet; he is going to represent us well. He is a child who will go far in this world,” she said of the 15-year-old who is the Head Boy of his secondary school.

Oyo Govt: We Are Decontaminating Secretariat For Workers To Resume Next...