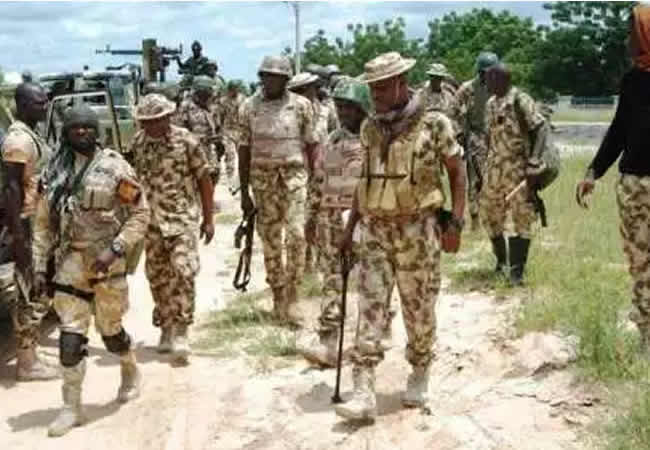 This came hours after the troops announced on Thursday, the killing of 29 bandits in an encounter in Moriki general area in the state.

This was made known to the News Agency of Nigeria on Friday, in a statement signed by the Acting Force Information Officer, Lt. Ayobami Oni-Orisan.

He said the bandits were overrun at their camps in Madada forest under Dansadau District in Magami of Maru local government area of the state.

The spokesman said, “the troops maintaining an aggressive posture, encountered heavy resistance from the heavily armed bandits who were eventually overpowered and ran away with bullet wounds.

“The gallant troops effectively neutralized 15 bandits and destroyed all their camps and logistics.”

He, however, stated that one soldier was killed and a vigilante member seriously injured in the encounter.

Oni-Orisan maintained that the troops had continued the pursuit of the fleeing bandits “with the explicit orders to destroy all camps and neutralize any resistance.”

He noted that Madada forest had become too notorious for harbouring heavily fortified bandits camps in the state.

He recalled that” earlier, on 26 June 2019, the troops, acting on actionable intelligence, apprehended two suspected bandits’ informants at Bagega notorious for spring on troops’ movement and deployments for onward relay to the bandits.

“The troops also in Wanke and Kanoma of Maru local government recovered about 100 cattle from armed bandits who earlier rustled them from Kanoma district.

“On sighting the troops, the severely demoralized and destabilized bandits fled the encounter and abandoned their mission in the area with gunshot wounds.

The statement restated the appeal of the Force Commander, Maj. Gen. Jide Ogunlade encouraging members of the public to provide credible information to the troops that would assist in annihilating the bandits.

The commander assured that the troops will not relent until banditry is completely wiped out from the state.