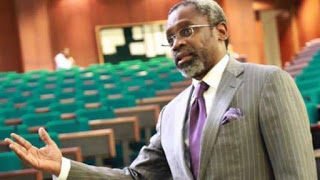 An aspirant to the position of speaker of the incoming House of Representatives of the 9th National Assembly, Femi Gbajabiamila, has denied being convicted by the Supreme Court of the State of Georgia in the United States of America over criminal offences.

This is, however, contrary to the position taken by Coalition of United Political Parties, CUPP, which on Tuesday in Abuja, publicly showed documented evidence that Gbajabiamila was, indeed, convicted by the court on criminal actions.

Beside the CUPP’s legal action, a national taxpayer, Phillip Undie, is also in court against Gbajabiamila, praying the court to stop him on the account of his criminal conviction.

But while the case is expected to be heard by a Federal High Court in Abuja, tomorrow, Director-General of Gbajabiamila Campaign Council, Abdulmumuni Jubrin, said his principal has never been found culpable by any legal authorities anywhere in the world.

Jubrin, who spoke at a press conference in Abuja, yesterday, said his reaction was a response to CUPP’s claim.

Flanked by some supporters at the briefing, Jubrin said: “In the last few weeks, the media has been awash, once again, with what has become a recurring fabrication of false accusations and outright lies against the person of the Leader, House of Representatives, Femi Gbajabiamila.

“The latest was a live press conference addressed, yesterday, by someone claiming to be speaking on behalf of Coalition of United Political Party, CUPP. But for the publicity the press conference attracted, we would have simply ignored the baseless and unfounded allegations.

For the benefit of the doubt, we wish to once again state emphatically that Femi Gbajabiamila has never been convicted for any crime in the United States of America, Nigeria or any other country around the world for that matter.

‘’He has never been accused of corruption and has no corruption case hanging on his neck in Nigeria or anywhere around the world.

Jubrin further stated that Gbajabiamila was yet to be served with any court summons as at yesterday.

He said: “This is to inform the general public that CUPP is battle ready and will be releasing fresh evidence involving his USA immigration status, including his social security number containing a different date of birth from the one he is using in Nigeria and the foreign account he operated before 2007 against the CCB Act.

“We are on standby to fire a new salvo from the opposition headquarters if Gbajabiamila and his boy attack the CUPP today. The CUPP has reserved the mother of all offensive that will even ensure that Gbajabiamila will not even be eligible on election day.”

Earlier, spokesperson of Bago Campaign Organisation, Victor Ogene, and Abdul-Munin Jibrin had spoken on national television, detailing their chances to win the position of the speaker.

Asked whether his candidate was threatened by Gbajabiamila’s endorsement by All Progressives Congress, APC, Ogene said they were not jittery.